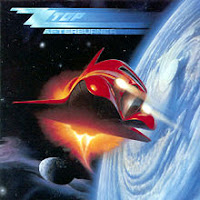 Happy sixty-second birthday today to singer and guitarist Billy Gibbons of ZZ Top. Besides four decades of hard rocking blues, Gibbons also has a recurring role on the FOX TV series Bones, playing a fictionalized version of himself as the highly protective father of Angela Montenegro. He also started a successful line of hot sauces and other products under the BFG Brand in 2011.

Back in the 1980’s, ZZ Top was working hard to follow up their hugely successful eighth studio album Eliminator (click here for that review). Their ninth album, 1985’s Afterburner, was a worthy follow up. It went to number 4 on the US Billboard Album chart, number 3 in Sweden, number 2 in the UK and Switzerland, and number 1 in New Zealand.


Side one starts off with driving drums of Frank Beard and the synth keyboards of Dusty Hill on “Sleeping Bag”, the first single from the album. The song spent thirteen weeks on the US Billboard charts, topping out at number 8; it was also a number 1 Mainstream Rock Tracks hit for two weeks (the first for the band). I really like Gibbons’ guitar solo on this one. I recall that the video for the song was in heavy rotation on MTV back in the day, when videos ruled that channel.

“Stages”, the second single from the album, went to number 21 on the US Billboard charts and too spent two weeks at the number 1 spot on the Mainstream Rock Tracks chart. This one too has an up-beat tempo, this time at a bit more urgent clip. The lyrics talk of the stages of a relationship that a couple sometimes goes through.

The magic did not strike three times in a row though; “Woke Up With Wood” only reached number 18 on the Mainstream Rock Tracks chart. Still, this song rocks hard and is full of sexual innuendo, typical for the band.

“Rough Boy”, the slower ballad third single, reached number 22 on the Billboard Hot 100 and number 5 on the Mainstream Rock charts. Gibbons’ guitar takes center stage on this one, wringing with emotion to mirror the lyrics.

The next track kicks things back into high gear with a pedal to the metal rocker with Hill on lead vocals. “Can’t Stop Rockin’” reached number 8 on the Billboard Mainstream Rock Tracks chart; it was also featured in the film Teenage Mutant Ninja Turtles III in 1993.

Side two begins with “Planet of Women”, a high energy celebration of the fairer sex.

“I Got the Message” has a stronger synthesizer focus to its opening, simulating the sound of radio waves. It is a pretty cool effect.

The fourth single “Velcro Fly” went to number 35 on the Billboard Hot 100 charts and number 15 on the Mainstream Rock Tracks chart. I really like its beat, very tribal in nature; that makes it an irresistible dance song. You just start bopping your head from side to side and let yourself totally go. It is definitely my favorite track from the album.

“Dipping Low (In the Lap of Luxury)” is next. The track sounds a lot like the previous album’s track “Gimmie All Your Lovin’”.

“Delirious” went to number 16 on the Mainstream Rock Tracks chart. Again, Hill takes the lead with the backing vocals of the title coming in a synthesized manner. This one has some very cool guitar solos to it.

Afterburner was released during the Fall of my sophomore year of college. I remember that it was a popular album to hear blasting from dorm windows, especially down on Fraternity Row. ZZ Top found a partying groove in the 80’s and worked it out well with this album and its predecessor. After twenty six years, this one holds up pretty well.
Posted by Martin Maenza at 4:30 AM

I love "Rough Boy", one of my favorite post-Deguello songs from the band.

I bought ELIMINATOR recently, and it's so much fun. I need to get AFTERBURNER and RECYCLER next time I'm shopping on iTunes.

I agree with your review, this album still holds up today. I've always enjoyed "Stages" and "Delirious" the most.

Interesting note to the video for Velcro Fly: It was choreographed by Paula Abdul.

Derrick and Cory, thank you both for your comments. They are greatly appreciated.

Oh, and Cory, I did not know Paula Abdul choregraphed the video for "Velcro Fly". I need to go watch that again - it has been ages.

The deluxe version of ELIMINATOR in iTunes comes with 4 music videos. One of the videos is quite lengthy, telling several minutes of story before the song even begins.