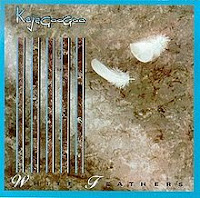 Happy fifty-third birthday today (December 19th) to Christopher Hammill, better known to all of us 80’s music lovers as Limahl, the lead singer for Kajagoogoo.

In 1979 in Bedfordshire, England, a four-piece instrumental group was formed by Nick Beggs (bass), Steve Askew (lead guitar), Stuart Croxford Neale (keyboards) and Jez Strode (drums). In 1981, they advertised for a lead singer and ended up choosing Limahl to round out the group. The group then settled on a new name of Kajagoogoo.


In 1982, the band was signed to the EMI record label and, with some production help from Duran Duran keyboardist Nick Rhodes, in 1983 released their first full length album White Feathers. The record went to number 5 in the UK and number 7 in Germany and Sweden; in the US the record climbed as high as number 38 on the Billboard Hot 200.

Side one begins with the title track “White Feathers”, a synth-pop dance track with a funky groove. The song has a very catchy chorus as well as the repeated “one more shot and then down I go…” lyrical hook.

Next up is the band’s smash hit “Too Shy”, the first single from the album. The song went to number 1 on the charts in the UK (for two weeks) and Germany (for five weeks), number 2 in New Zealand and Switzerland, and number 4 in Austria and Sweden. The song reached number 5 on the US Billboard Top 40 thanks to a heavy rotation of the music video on the growingly popular MTV.

“Lies and Promises” is next. The lyrics tell of a relationship where one of the parties is being less than honest and failing to follow through on their word. The song has a great new-wave dance beat to it as well.

“Magician Man” brings to mind an image of a street carnival or a side-show where a con man is ready to use slight of hand to take advantage of unsuspecting patrons. The chorus even has the carnival barker quality to it with how the lines are presented.

The instrumental track “Kajagoogoo” closes out the first side (the only words are a chanting spelling of the title/band‘s name). The song, with its infectious rhythm, was used during the opening title of the 1984 John Hughes film Sixteen Candles.

Side two opens with “Ooh to Be Ah”, the album’s second single. This one went to number 7 in the UK and number 20 in Germany. The lyrics paint a picture of an upscale boutique selling the latest of fashions, but warning that clothes are not enough to completely change one’s image. This very much could be a commentary of the trends of the early 80’s where at times the lines between fashion and talent were blurring.

“Ergonomics” is an interesting title for a song. I never really got to know the term until the 90’s when working and the company was concerned about comfortable environments for us to work.

The third and final single was “Hang on Now”, which went to number 13 in the UK and number 78 on the US Billboard Hot 100. This mid-tempo track has a nice swaying way about it as the lyrics tell of the early days of a relationship when things are a little confusing and unsure.

I like the up-tempo of “This Car Is Fast”; it gives a sense of a sporty, racing vehicle. The lyrics though are delivered as if from an advertising agency, convincing the viewer that this is something a person needs for a satisfying life.

The original vinyl album closes with “Frayo”, a song with a quirky, urgent tempo to it. The words too are delivered in short, curt clips, further adding to the song’s mood.

The 2004 CD re-release of the album included eight additional tracks, including remixes of the three hit singles as well as non-album track B-Sides.

Back in the 80’s, I mostly knew Kajagoogoo from “Too Shy”, both from heavy radio airplay in the US and from the MTV video. It came out during my senior year of high school and I recall it being popular at dances and in the bars I frequented that summer and during the Fall of my first year of college in 1983. Because US radio failed to pick up on any of the later singles, the rest of this album sort of fell off my radar until about a year or so ago.

I was able to download White Feathers and add it to my digital music library. Since then, it has been on a solid rotation with other music from that decade. I find it to be a great dance record, fitting well into the same category as Duran Duran, the Human League and the like.
Posted by Martin Maenza at 4:30 AM