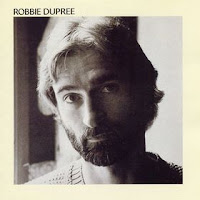 Born in Brooklyn, NY, Robert Dupuis took the stage name of Robbie Dupree when he performed. He started out singing on street corners in the 60’s and performed in Greenwich Village night clubs in the early 70’s with Nile Rodgers in a group called New World Rising.


In June of 1980, he released his self-titled debut album Robbie Dupree on Elektra records. The album did well (spending twenty-one weeks on the US Billboard Album chart and peaking at number 51) and generated two hit singles. It also earned Dupree a Grammy nomination for Best New Artist that year.

Side one starts with the smash hit “Steal Away”. The song spent twenty-three weeks on the US Billboard Hot 100 and made it all the way to the number 6 spot. The lyrics tell of a wrong but irresistible romantic liaison between two lovers. This is one of those songs I had on a 45 record back in 1980; this one probably spun on my turntable dozens of times that year. It is a solid pop record with a catchy rhythm.

The B-side of that first single was the second track on the album “I’m No Stranger”. It has a smooth saxophone opening and a steady percussion beat. The song tells of experience with loneliness and heartache. The jazzy horn solo mirrors the lyrical theme quite well.

The next track “Thin Line” continues the theme of failed relationships.

“It’s a Feeling” is a slower-tempo piano ballad that celebrates the electricity of attraction. I like the harmonica on this one.

Side two begins with the other hit single “Hot Rod Hearts”. This song spent eighteen weeks on the US Billboard Hot 100 and reached number 15. I had this one on a 45 too and have it rated as a four-star song in my iTunes library. Whenever I hear it, I am instantly taken back to the summer of 1980 when I was fifteen years old and I find myself singing along to it. I am sure it played constantly on the radio back then. The lyrics just remind me of young, innocent love finding each other for the first time.

Things change up a bit with “Nobody Else” and its disco-dance rhythm to it. Again, I like the saxophone solo.

“We Both Tried” is another ballad with a strong piano foundation and sweeping strings. The melancholy lyrics tell of a relationship that has reached a point of finality, where goodbye is really the only option left.

“Love Is a Mystery”, the B-side to the second single, has a jazzy swing to it

The album closes with “Lonely Runner”, a song about taking the easy way out rather than sticking around to try to make things work out.

Robbie Dupree is a decent soft rock record about love and loss. The songs are very well composed, melodic and tell stories. I was very much into this lighter kind of music during my freshman year of high school when the record came out. It falls into the same category as music by Rupert Holmes (another singer-songwriter from that period) and Michael McDonald (who Dupree’s voice has some similarities to).
Posted by Martin Maenza at 4:30 AM

I would have bet money (and lost) that Michael McDonald sang background vocals on this album. I pulled out my scratched copy of the LP to see if there were any yacht rock names I recognized in the credits, but they were few and far between: Bill LaBounty on keyboards/background vocals (and co-writer of "Hot Rod Hearts") while David Foster and Bill Champlin co-wrote "We Both Tried." That's it.

Nonetheless, "Steal Away" borrows liberally from The Doobies' "What A Fool Believes" and I could care less. Like you, I had the 45 and listened to both sides which was a rare occurrence as I almost never listened to b-sides back then.

This album gets my seal of approval.