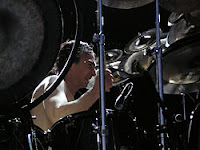 The San Francisco born Bozzio was inspired to become a drummer after seeing the Beatles perform on the Ed Sullivan Show. After high school, he went to the College of Marin on a music scholarship. After school, he played in a number of local jazz groups.


In 1975, Bozzio recorded and toured with Frank Zappa. During that time he met guitarist Warren Cuccurullo and the two, along with Terry’s then wife vocalist Dale, founded the band Missing Persons.

After that band broke up, Bozzio worked in the solo band of Andy Taylor from Duran Duran. He has also worked with Robbie Robertson, Don Dokken, Herbie Hancock, Dweezil Zappa and Richard Marx.

Previously I have reviewed a few of the Missing Persons albums: