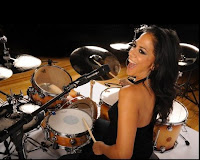 Born in California, Sheila grew up in a family of music. Her father is the famous Mexican-American jazz percussionist Pete Escovedo, and her uncle Alejandro Escovedo has worked with groups like the Nuns, and Rank and File. Jazz/salsa musician Tito Puente is her godfather.


She made her first recording debut in the Alphonso Johnson record "Yesterday's Dream" in 1976. Before that decade ended, she already had played with the likes of George Duke, Marvin Gaye, Herbie Hancock, Lionel Richie and Diana Ross.

Sheila first met Prince in 1978 after a concert where she was performing with her father. That fateful meeting lead to their working together on Prince's Purple Rain recording sessions which then led to his assisting her with her solo recording career in the 1980's. She continued to serve as a drummer and musical director for a number of his touring bands in the past three decades.

Sheila continues to balance a strong solo career with her many collaborative efforts with other artists around the world.

I discovered Sheila E.'s music through her initial connections with Prince. From that first album, I have been a huge fan. I love that she translates her passion for life into music, and every time I see her perform (either in concerts or on television) I know I am in for a treat. I am very much a fan for life.


For my review of her 1984 debut The Glamorous Life, click here

For my review of her work on the soundtrack for the 1986 film Krush Groove, click here

For my review of her recent 2011 album with her father and the rest of the E Family Now and Forever, click here
Posted by Martin Maenza at 4:30 AM

great blog, I always liked her and appreciated her for her many talents. thanks!