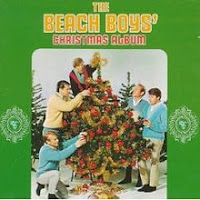 Welcome to another edition of Sixties Saturday, a very special Christmas Eve edition to boot.

In 1963, the California based rock band the Beach Boys released a holiday track. The song did so well that the following year they put out a full album of Christmas tunes. The Beach Boys’ Christmas Album reached number 6 on the US Billboard Christmas album charts in 1964 and eventually became a gold seller. The record contained a mix of original songs and holiday standards.


Side one featured five original compositions by Brian Wilson, with some help on three of them by Mike Love. It starts off with the aforementioned 1963 hit “Little Saint Nick”, a song which reached number 3 on the Billboard Christmas charts that year and number 69 on the regular Billboard chart the same week. Musically, the song borrows its rhythm and general composition from the band’s hit “Little Deuce Coupe” which came earlier that year. Lyrically, the song describes Santa’s sleigh as if it were a souped-up sports car.

“The Man with All the Toys” is a story about someone coming upon Santa’s home where he works on all those presents for the children of the world. It has a cute “hiccup-like” refrain on the chorus. It was released as a single in 1964 and reached number 6 on the Billboard Christmas charts; over the decades it has garnered enough sales for it to make it to Billboards’ Top 100 Best Selling Christmas songs.

“Santa’s Beard” is a bouncy number about a guy taking his little brother to see Santa at a local department store. The child questions if that is really “the Santa” and ends up exposing the store worker as a fraud. The older brother explains how this is one of Santa’s helpers.

Another upbeat track is the original “Merry Christmas, Baby”. It has a pleasant swing to it in a style that the Beach Boys had mastered by this point in their career.

“Christmas Day” stands out as being the first Beach Boys song to feature lead vocals by guitarist Al Jardine. This one has a very tropical sound at the start thanks to the guitar which reminds me of a ukulele.

The side closes with a cover of “Frosty the Snowman”, first made famous by Gene Autry in 1950. This was very likely a song the guys grew up on kids of the 1950’s.

Side two begins with “We Three Kings of Orient Are”, the only song on the album with a religious connotation to it. The group is supported by a full orchestra on this one, giving it a more revered, rather than pure pop, sound. It is also the longest track on the album.

The Beach Boys‘ take on “Blue Christmas” slows things down from the typical Elvis version, adding horns and orchestration that give it a sort of Disney animated, fairy-tale sound.

The guys‘ cover of “Santa Claus Is Comin’ to Town” mixes a number of elements including some big band, a bit of circus, big top take to its chorus, and a little bit of “Pop Goes the Weasel” thrown in for good measure. For me, it is a little bit too all-over-the-place.

The band provides a sweet take on Irving Berlin‘s classic “White Christmas”. They keep their interpretation simple without adding too much to it beyond their pleasing vocal harmonies.

The same can be said for their take on the Bing Crosby classic “I’ll Be Home for Christmas”; it is really the harmonies that make this version so enjoyable.

The album closes out with the New Year’s standard “Auld Lang Syne”. The guys do an a cappella version along with a special message delivered by Dennis Wilson on behalf of all the band.

While I knew songs like “Little Saint Nick”, the rest of The Beach Boys’ Christmas Album was relatively new to me until I married my wife in 1990. She has always been a fan of the group and picked up the CD within the first couple years of our marriage. Since then, these songs have found their way into our annual holiday music mix.
Posted by Martin Maenza at 4:30 AM