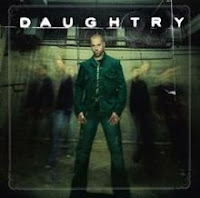 The native North Carolinian came to national fame as a fifth season contestant on American Idol. A strong contender in a season packed with talent, he placed fourth that season and was able to move on to work on his debut album for RCA records. The self-titled Daughtry was released in 2006 and became the fastest selling debut rock album in Soundscan history. Within five weeks of its release it had sold over one million copies and by its ninth week on the charts it reached number 1 on the US Billboard 200 chart. It stayed on that chart for a total of one hundred and thirty six weeks. The album also won the American Music Award in 2007 for Favorite Pop-Rock Album.


The CD opens with “It’s Not Over”, the album’s first single and a song that was nominated for Best Rock Song and Best Rock Performance by a Duo or Group for the 50th annual Grammy awards. The single reached number 4 on the US Billboard Top 40 chart. It is about a relationship in trouble has a mid-tempo on the verses and then explodes at the chorus.

“Used To”, a track whose lyrics reflect upon a relationship’s history, is next. Like the previous track, this one is very much in a salvaging mode to try and repair things before it is too late.

The second single, “Home”, reached number 5 on the US Billboard Top 40 chart and also number 5 on the Canadian chart. This is one of my favorite tracks from the record. The lyrics are about going back to a safe place, to regroup and recharge. It has a country-rock sound to it.

“Over You”, as the fourth single, went to number 18 on the US Billboard charts and number 16 in Canada. This break-up song talks about how hard it is to get over someone until, finally, that one day you eventually do. I have come to really like this song too, mostly from hearing it quite a bit on the radio at the time it was on the charts.

The third single “Crashed” went to number 24 on the US Billboard Mainstream Rock chart.

As a single, “Feels Like Tonight” made it to number 24 on the US Billboard charts and number 30 in Canada. The song has a similar structure to the first track, slower verses and slightly faster choruses. This is one of two tracks that Daughtry, however, did not have any hand in writing (the other is the album’s final track).

“What I Want” features a guest appearance by Guns ‘N Roses guitarist Slash. The song has a lot of energy and a great edge to it. It peaked at number 6 on the US Billboard Mainstream Rock chart and number 89 in Canada.

“Breakdown” was a track that Daughtry rewrote as a combination of two tracks that he performed with his former band Absent Element.

“Gone” does not do a lot for me personally. It suffers from a sounds-the-same and what was known in the old vinyl days as back-side-filler-track syndromes. It is not a bad song; it just does not stand out much for me.

Thankfully we get a nice change-up with the next track. “There and Back Again” with its urgent rhythm and harder edge features Brent Smith of the band Shinetown on rhythm guitar.

The ballad “All These Lives” has a pleasant acoustic guitar opening to it but quickly slides into the full-throttle chorus. I would have liked it if this one had stayed with a stripped down approach all the way through.

The final track on the album was also the final single. “What About Now” went to number 18 on the US Billboard chart, number 17 in Canada, and number 11 in the UK. The song was covered in 2009 by the Irish boy band Westlife. This one does what I was hoping the previous track would do - hold back a bit. That helps to make it one of my favorite tracks on the record too.

In 2006, I was very much an avid watcher of American Idol and this was a season I had a number of favorites. As a North Carolinian resident, I was seeing the local pull for not only Daughtry (who my wife was a fan of) but also Bucky Covington (another favorite of my wife’s that season) and Kellie Pickler. And though I was a fan also of Elliott Yamin’s cool jazzy style, I was very much in the camp of that season’s winner Taylor Hicks from the start.

There is no denying that Daughtry brought a rock-flavor to the show that had been lacking in the finalists for the seasons prior to it. Also, as evidenced by this debut record in which he had his hand writing most of the tracks, he was clearly ready to break and the show helped him reach a wider audience. He definitely showed that one did not have to win American Idol in order to be a huge success. If anything, I think, not being hampered with the crown was probably the best thing for his career. Too often the winners had many hands involved in their debut records, and that often lead to a product that was not true to the artist’s own nature. Daughtry is very much a debut record that Chris Daughtry wanted to make, his way.
Posted by Martin Maenza at 4:30 AM