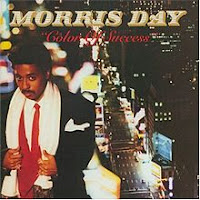 After their third album Ice Cream Castle (click here for that review) in 1984, the Minneapolis based R&B/funk band the Time split up (for the first time).

Morris Day naturally moved from the role of the group's lead singer to a solo recording career. In October of 1985, he produced and released his debut solo effort Color of Success where he provided vocals, drums and percussion, and some of synthesizer parts as well. The album charted well, reaching number 37 on the US Billboard Album Chart and number 7 on the Billboard R&B/Hip-Hop Album chart.


Side one starts with the title track and first single from the album (which went to number 15 on the US Billboard R&B chart). "Color of Success" begins with a brief music box version of "Somewhere Over the Rainbow" before moving into a synthesizer supported, funky, strutting dance groove. A female news reporter interjects periodically, providing a narrative of Day's move to a solo career. The lyrics mirror his outlook towards a lucrative solo career.

"The Character" continues the same synth style and tempo as the first track. As a single, it hit number 34 on the US Billboard R&B chart. With the lyrics, Day reflects upon how the media sees him as a character, the playboy role that he portrayed as part of the leader of the Time. In fact, he states he's much different than that and is in fact a bit scared of love.

Next is my favorite track from the record, a dance-move song called "The Oak Tree". As a single, it went to number 63 on the US Billboard Hot 100 and number 3 on the US Billboard R&B chart. The song is a nearly seven-minute down and dirty groove that is very reminiscent of "The Bird" from the last Time album. I recall that this one was a popular track in the dance clubs during my later college years thanks to its catchy hooks and upbeat rhythm.

Side two keeps the dance party going with "Love Sign", a song about letting a lady know that the night is right for a romantic hook-up. The six-plus minute track would mix very well with the last track from the first side as they have similar musical structures and tempos.

Next up is the much expected slow jam track. Clocking in at seven-plus minutes, "Don't Wait For Me" has seductive overtures which Day delivers with smooth ease. There are very sensual, grinding guitar solos around the five minute and the six-and-a-quarter mark that drives the point home.

The record closed with the bouncy "Love / Addiction", a cautionary tale about falling for an irresistible woman.

I owned a copy of Color of Success on vinyl, purchased in the late 80's along with Day's follow up solo album. In recent years, I purchased the tracks in digital format for my iTunes music library as well. I like the record because it really is a continuation in a lot of ways of what the Time was producing in their albums of the mid-80's.
Posted by Martin Maenza at 4:30 AM