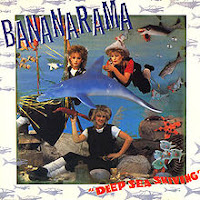 Formed in 1979 by Dallin, Keren Woodward and Siobhan Fahley, the group was big followers of the punk rock and post-punk scenes in the UK. They released a single in 1981 that was an underground favorite. In 1982, they appeared on the track “It Ain’t What You Do…” on the Fun Boy Three debut album. Finally, on March 2nd of 1983 they released their debut album Deep Sea Skiving which went to number 7 on the UK album charts and number 63 on the US Billboard Hot 200.


Side one starts with “Shy Boy (Don’t It Make You Feel Good)”, the second single from the album. It reached number 4 on the UK singles charts, number 83 on the US Billboard Hot 100 and number 14 on the US Hot Dance Club Play charts. The song is rumored to be a tribute to teenaged London pirate radio comedian Mark Gould. The song has a bouncy beat to it that always puts me in a positive mood when I hear it. I remember the first place I saw the music video for the song: Fredonia State University was having a music video mixer at their student union in 1983 and a couple of my high school buddies and I went, mostly to check out the videos and perhaps eye a few cute college co-eds.

“Doctor Love”, an up-beat dance track, was written by Paul Weller of the Jam and the Style Council. I like the synthesizer hooks on this one, played by Fahey, and the funky bass line by Dallin and Woodward.

“What a Shambles”, one a number of tracks written by the trio of ladies, has a melancholy tone to it as the lyrics reflect on the wreck a person has made of their life. The song often puts me in a reflective mood.

The first single from the album “Really Saying Something” is a cover of the 1964 Motown classic by the Velvelettes. This version went to number 5 on the UK charts and number 16 on the US Hot Dance Club Play charts. Fun Boy Three returned the favor by providing percussion and singing backup on this track. This is one of my favorites from the album, a four-star ranked track in my music library. The beat is so entrancing.

“Cheers Then”, the third single, went to number 45 on the UK Singles chart. The music video was a re-enactment of the musical film the Sound of Music. I really like the vocal harmonies on this one, very sweet and sentimental with just a pinch of sadness thrown in.

Side two of the UK vinyl release begins with “Aie a Mwana”, their 1981 underground hit. The original version of the song was recorded in 1971 under the title “Aieaoa” and again in 1975 by a group called Black Blood. Even though the track reached number 66 on the Hot Dance Club Play list in the US, the US vinyl release of the album only had ten songs and did not include this track. The song has a nice disco beat to it.

“Young at Heart” was also written by the gals along with Roger Hodgens, who was dating Fahey at the time. The song was later covered in 1984 by Hodgens’ Scottish group the Bluebells. I like the bouncy piano line on this one.

“Na Na Hey Hey (Kiss Him Goodbye)” is a cover of the 1969 number 1 hit song by Steam. As the fourth and final single from the album, this version went to number 5 in the UK, number 101 on the US Billboard Hot 200, and number 14 on the US Hot Dance Club Play charts. I am a big fan of this version by Bananarama; I like the distant backing vocals the bounce from speaker to speaker and the synthesizer supported dance beat.

The driving rhythms of “Hey Young London” provide a callout to the youth of the UK at the time. This is one that sounds amazing with the bass turned up to bring out the reverberating percussion.

Another composition by the trio “Boy Trouble” is a reflection upon a failing relationship. Clearly the singer is ready to wash her hands of the whole thing even though the guy doesn’t quite get it.

The album closes with “Wish You Were Here”, also written by the group. The song harkens back to the girl group songs of the 60’s.

I had a copy of Deep Sea Skiving on vinyl back in 1983, bought during my senior year of high school. The songs were very popular on the nearby college radio station that I listened to as well. I spun this record a lot on my stereo turntable during my college years of the 80’s, enjoying the wonderful harmonies of the three ladies and the catchy beats. To this day it remains a favorite album of mine as it is a fond reminder of my young adult years.

In recent years, I picked up the 2007 CD re-issue of the album to replace the long gone vinyl copy I owned. Besides the original eleven songs it also includes five additional tracks: “Give Us Back Our Cheap Fares” (the B-side to the “Really Saying Something“ single), “Girl About Town” (the B-side to the single of “Cheers Then“), “He’s Got Tact” (a song written in 1982 as a jingle for the Honda Tact motor scooter and released in the Japanese market only), “Tell Tale Signs” (the B-side to the single “Na Na Hey Hey…”) and “No Feelings” (a cover of a song by the Sex Pistols).
Posted by Martin Maenza at 4:30 AM