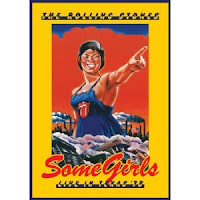 Last month, just in time for a holiday gift idea for that classic rock lover on your list, Eagle Rock released Some Girls Live in Texas ‘78, a concert DVD of the Rolling Stones from their huge 1978 tour. This performance was filmed on July 18th, 1978, at the Will Rogers Memorial Center in Forth Worth, Texas; it was right about the time that their Some Girls album was peaking at number 1 on the Billboard Hot 200 charts.


The original concert was shot on 16mm film; the footage in this release has been painstakingly restored and the sound has been remixed and remastered from the original tapes. The end result is a great looking show that mixes tracks from the new album with classic earlier hits from their career. I was extremely impressed with the production value achieved on this show from over thirty three years ago.

For me, these are the Stones’ songs I grew up on (thanks to my brother who is a huge fan of the group). Favorites of mine like “Honky Tonk Women”, “When the Whip Comes Down”, “Beast of Burden”, “Miss You”, “Tumbling Dice”, “Brown Sugar” and “Jumpin’ Jack Flash” are all part of the seventeen songs presented.

My sixteen year old son watched the concert footage with me, appreciating the amazing music. He also got to understand the context of “moves like Jagger” (no one was a more energetic, wired front man on stage). There is no doubt why Mick Jagger, Keith Richards, Charlie Watts, Bill Wyman and Ron Wood are considered rock legends; one look at this concert when the guys were in their 30’s shows they knew how to entertain an audience.

Also included on the DVD are some very cool extras.

First, there is a 20/20 piece with the guys, featuring a very young Geraldo Rivera, from June 1978. It is interesting to contrast Rivera’s youthful enthusiasm with the more stoic stance of the show’s anchor Hugh Downs.

Also, there is the Stones’ appearance on Saturday Night Live from October 1978 including their performances of “Shattered”, “Respectable” and “Beast of Burden”. Also included is a sketch that features Mick Jagger and Dan Aykroyd.

The final bonus feature is a 2011 interview with Mick Jagger with questions focused on the 1978 tour and the Some Girls album. What strikes me is the contrast of Mick in his 30’s in with the man today. It is hard to see your musical icons age. Though he still has it, you can see the signs, to use one of their lyrics, that time isn’t fully on his side these days.

The booklet that comes with the DVD gives great details about the concert and tour itself. My favorite thing is the last two pages which lists the concert dates and cities for the tour. Also included are pictures of all the ticket stubs.

Why is this so cool?

July 4th, fourteen days prior to the recording of the show on this DVD, the Stones played at Rich Stadium in Buffalo, NY (just an hour from where I grew up). My older brother who was seventeen at the time attended that show.