Alan Parsons Project - The Turn of a Friendly Card 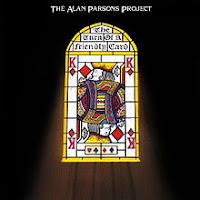 In November of 1980, the Alan Parsons Project released its fifth studio album The Turn of a Friendly Card. The progressive rock album, which told the story of a middle-aged man who gambles it all and loses, reached number 38 in the UK, number 22 in Sweden, number 16 in Canada, number 13 on the US Billboard Album chart, number 11 in Norway, and number 2 in Austria and Germany. It also generated two Top-20 hit singles.


I have to first remark on the album cover itself. I like the whole stained-glass window take on the King of Diamonds with the album name in the arch at the top. The way the light shines down through it and cuts the blackness of the edges is a very nice effect. This is one of those album covers that would look awesome framed.

Side one opens with “May Be a Price to Pay” which features Elmer Gantry on lead vocals. I like the strong combination of keyboards, guitars and strings on this one; they give the song a big, booming sound

“Games People Play” went to number 30 in Canada and number 16 on the US Billboard Hot 100. I remember hearing this one a lot on the radio, and I would often sing along with lead singer Lenny Zakatek on it. I’ve always liked the synthesizer hooks and the driving rhythm from the drums and piano. It gets you caught up right from the get-go and takes you on an amazing journey.

“Time”, the album’s second single, was sung by Eric Woolfson and reached number 15 on the US Billboard Hot 100 and number 9 in Canada. This haunting ballad also features Parsons on backing vocal. This one was cool to listen to with your headphone on and the volume cranked while lying in a darkened bedroom. It all made for a great mellow mood.

Zakatek takes the lead again on “I Don’t Wanna Go Home”, a song with an edgy, paranoid feel to it at the beginning and the end. The middle features a funky guitar groove.

The side closes with the instrumental track “The Gold Bug”, with its finger-snapping swing.

Side two of the original vinyl release ran together as a single, sixteen and a half minute track called “The Turn of a Friendly Card Suite”. In subsequent CD releases, the track was broken down into its five components.

Things start off with “The Turn of a Friendly Card (Part One)”, featuring Chris Rainbow on lead. The music has almost a folk-song lilt to it as the lyrics tell of the arrival at the big gambling oasis amidst the desert (Vegas).

Rainbow continues lead on “Snake Eyes”, a track that has a sleazy slide to it. The sounds of paying out slot machines and clacking poker chips bring to mind the imagery of a bustling casino.

The next movement is the instrumental “The Ace of Swords”, again bringing up that folk-song lilt at the start. It then moves into a tenser, addictive pace as the competition builds and the stakes get higher with each progressive hand.

“Nothing Left to Lose”, with a gentle, country-rock feel created by a simple guitar rhythm, features Woolfson.

Rainbow closes with the vocals on “The Turn of a Friendly Card (Part Two)”, a reprise of the movement that started the side.

Admittedly, I was not a huge Alan Parsons Project fan back when this album came out, during my early high school years. I liked the hit singles well enough but I passed on the progressive rock movement at the time. Today, as an adult, I can appreciate more the complexities of the compositions and Parson’s skill at creating something that is greater (a concept album) than the sum of its individual parts.
Posted by Martin Maenza at 4:30 AM

Love APP, everything up 'till Eye In The Sky, then I thought they lost an edge of sorts. But up until then, well, some really fantastic "album as art" stuff and very highly underrated. Interesting you bring up the album cover in the review. One of my favorites. Great blog. Please come visit my little music blog sometime. I think you'll find a few items of interest.