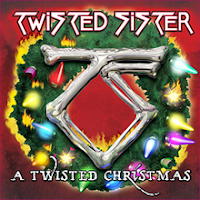 I decided to take a break from Soundtrack Sunday for a few weeks so that I could present some more holiday albums for the season.

In 2006, Dee Snider and his fellow band mates of Twisted Sister decided to put out a CD of holiday songs entitled A Twisted Christmas. Given the band's musical slant, the album, of course, delivers holiday standards in a heavy metal style. The album sold very well commercially, reaching number 147 on the US Billboard Hot 200 and number 27 on the Billboard Holiday charts.


It opens with "Have Yourself a Merry Little Christmas", the Judy Garland classic. I like how they start out slow and traditional and then stop to do it the proper, Twisted Sister way with searing guitars and pounding drums.

"Oh Come All Ye Faithful" gets its tune from the English hymn "Adeste Fideles" by John Francis Wade, written in 1751. The rocking version of the song here also incorporates the tune of the Twisted Sister classic "We're Not Gonna Take It" from 1984, a song whose melody was in fact inspired originally by the Christmas carol. So, this is Snider's way of bringing it all back around full circle. This version also closes with a rendition of "Hava Nagila", a popular Hebrew folk song composed in the early 1900's.

"White Christmas", as I noted yesterday, was a Bing Crosby classic. This version is as far from Crosby as you can get. Part of the guitar riff is based on the band's 1984 hit "I Wanna Rock". It also features Doro Persch, a Germany heavy metal rocker formerly of the band Warlock, on backing vocals.

The next track "I'll Be Home for Christmas" was also a Bing Crosby classic, this time from 1943. Lita Ford joins the guys here to provide very distinctive backing vocals. I really like the guitar solo on this one - definitely not what you’ll hear on your everyday Christmas carols.

"Silver Bells" was first recorded by Bing Crosby and Carol Richards in 1950. Clearly Snider and the guys have strong connections to those Crosby holiday classics, most likely having heard them growing up in the 60's and 70's on their parents' turntables. This version has a driving beat and a catch guitar riff on the verses.

"I Saw Mommy Kissing Santa Claus" was first recorded in 1952 by Jimmy Boyd. The Twisted Sister take continues the driving beat from the previous track to kick the cutesy innocence out of this classic.

"Let It Snow" was first record in 1946 and was made popular in the 1950's by the likes of Crosby and Frank Sinatra. On this track, the band brings on a blaring blizzard bass and beats. Why does it bring to my mind extreme snowmobiling?

"Deck the Halls" dates back to the late 1700's and was originally performed on the harp. Twisted Sister brings the song into the 21st Century with fa-la-la-la-la fury. The ominous bells in the middle of the song are a great touch.

Next, the Mel Torme classic "The Christmas Song (Chestnuts Roasting on an Open Fire)" undergoes its own toasting. Snider’s whiskey growl is a far cry from Torme’s velvet-fog crooning.

"Heavy Metal Christmas (the Twelve Days of Christmas)" is a very modern take on the English Christmas carol from 1780. There are no birds or pear trees here. This one is all tattoos, spandex, leather and studded belts.

The album closes out with a thirty-six second "We Wish You A Twisted Christmas" message.

Admittedly, A Twisted Christmas is not going to appeal to everyone. These certainly aren't your parents' Christmas songs, unless, of course, your parents happen to be of my generation who proudly fist-pumped and head-bobbed to Twisted Sister back in the 80's. If you are looking for something a little bit nontraditional for your holiday party, these songs just might be a way to go.
Posted by Martin Maenza at 4:30 AM

This is actually the only Christmas album I own. Nice review for it too.