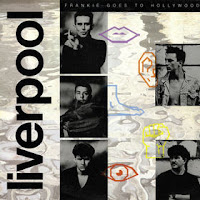 After their smash debut album Welcome to the Pleasuredome (click here to read my review of that record), Frankie Goes to Hollywood was pressed to follow it up. It was almost two years to the day until they released their second and subsequently final album as a group. 1986’s Liverpool did well in the band’s native UK (it reached number 5 on the charts) and around in Europe (number 5 in the Netherlands, number 8 in Norway, number 7 in Switzerland). In the US, however, the album stalled at number 88 on the Billboard Hot 200.


Side one opens with “Warriors of the Wasteland”. As the second single, the song only reached number 19 in the UK, number 7 in Germany and number 13 in Switzerland. Like other songs by the group, this one has its inspiration in literary works - in particular T.S. Eliot’s poem the Waste Land. It also borrows from films like Mad Max 2 and the Warriors. This dance song has a big feel to it, much like the title track of their first album. It also has some political overtones to the lyrics as well.

“Rage Hard“, the first single from the album, went to number 4 in the UK and spent two weeks at number 1 in Germany. The song has a harder rock edge to it with heavy guitars and thundering percussion. The lyrics also quote the Welsh poet Dylan Thomas.

“Kill the Pain” continues along the same vein with the rock sound.

Side two starts with “Watching the Wildlife”, the final single from the album and group; it went to number 28 in the UK and number 23 in Germany. I like the brass arrangements on this one and the up-tempo rhythms. The song has a strong pop sensibility to it.

The band gets back into the full dance groove with the next track “Lunar Bay”. It is definitely one of my favorites from this album.

“For Heaven’s Sake” has a confident swagger to it.

The album closes with the slower tempo of “Is Anybody Out There?”. It has a sweet, soulful sound to it, and perhaps it is a little bittersweet irony too being the final track of the final album.

While I owned the band’s first album on vinyl, I was not aware of Liverpool until just a few years ago. I downloaded the tracks for my music library in early 2009. And while it is a bit of a different direction for them, I have to say that the album is pretty good. I like the fact that all of the songs are original compositions; as opposed to the first album which had quite a few covers (good covers though). If you’re a fan of Frankie Goes to Hollywood but are only familiar with their hits like “Relax” and “Two Tribes”, you might want to give this one a listen.
Posted by Martin Maenza at 4:30 AM