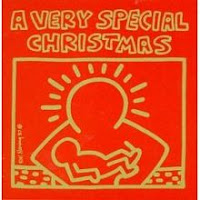 Merry Christmas to all of you, my blog readers. Today (December 25th) also happens to be the fifty-seventh birthday of Annie Lennox of the Eurythmics.

In 1987, the first of what has turned into a sporadic series of A Very Special Christmas albums was released. The series, created by music producer Jimmy Iovine, takes popular music artists of the time and has them sing holiday favorites. The album sales go to benefit the Special Olympics charity. Each cover has been designed by artist Keith Haring.


This year we’ll go back to that very first one that started the series, and we‘ll take a look at the original vinyl presentation of the record which has sold over four million copies in the United States alone.

Side one starts with “Santa Claus Is Coming to Town” by the Pointer Sisters. Ruth, Anita and June had been on fire in the early part of the 1980’s with upbeat, danceable songs. Their version of the 1934 classic is equally full of high energy and fun.

The Eurythmics take us to a “Winter Wonderland” with their rendition of the 1934 classic. Lennox’s vocal range, from deep growls to soaring high notes, is incredible, and Dave Stewart’s synth arrangement has so many great layers.

Next, Whitney Houston asks “Do You Hear What I Hear?” The original track written in 1962 was a song written by a married couple as a plea for peace during the Cuban Missile Crisis; it became a smash hit holiday song in 1963 after Bing Crosby recorded it. Houston’s version is backed by a powerful choir, harkening back to her days growing up and singing in church.

Bruce Springsteen and the E Street Band put a little rock into the 1947 R&B “Merry Christmas, Baby”. I like that this one was recorded live because the Boss and his pals are excellent in concert. I also love Clarence Clemmons’ saxophone solos that add the blues to the number.

Pretenders are next up with a sincere wish for the listener to “Have Yourself a Merry Little Christmas”.

“I Saw Mommy Kissing Santa Claus” was initially done in 1952 by thirteen year old Jimmy Boyd in a cute, innocent style. This version by John Mellencamp has a rocking edge with a hint of naughtiness to it. I too like the down-home touches with a little Zydeco spice thrown into the mix.

Sting closes the side with a haunting version of the carol “Gabriel’s Message”. The stripped down orchestration is supplemented by an echoing, chant take on the vocals (done in a round of sorts).

Side two kicks off with a little old-school rap courtesy of Run-D.M.C. with the original tune “Christmas in Hollis”. It was released as a single in 1987 and again in 2000, the later time hitting number 78 on the US Billboard Hot R&B/Hip-Hop Songs chart. The song samples such holiday tunes as “Frosty the Snowman”, “Jingle Bells” and “Joy to the World”. I can’t tell you how easily the verse that goes “it’s Christmas time in Hollis, Queens, Mom’s cooking chicken and collard greens…” trips off my tongue when I hear this one.

U2 is next with “Christmas (Baby Please Come Home)”, a cover of the 1963 Darlene Love song. The guitar work gives it a retro rock sound.

Madonna sings along to a playful piano on “Santa Baby”, which was first immortalized in 1953 by Eartha Kitt. Some consider this version pale in comparison to the original. I think the Material Girl gives a teasing performance here that plays well to her image at the time.

Bob Seger lends his voice to “The Little Drummer Boy”, a song first recorded in 1955. The arrangement sticks close to the standard until the electric guitar and saxophone are brought in.

Canadian rocker Bryan Adams belts out with “Run Rudolph Run”, very much in the tradition of Chuck Berry’s original from 1958 - at a high energy, unyielding tempo.

The original vinyl album had Bon Jovi doing “Back Door Santa”, a song first recorded in 1968 by Clarence Carter. As with a number of Carter’s tunes, this one is a bit sexually suggestive in nature. The boys from Jersey get down and dirty with their rocking rendition.

The record closes out with a pair of spiritual Christmas songs by two powerful female voices. Alison Moyet lends her voice to the “The Coventry Carol” which dates back to the 16th Century. This is followed by Stevie Nicks with the classic “Silent Night”.

In November of 1987 when this record was released I was finishing up my final classes of my final semester of college. I picked up a copy of this first A Very Special Christmas on vinyl just before the holidays that year; it quickly became a favorite of mine for many years after. I like the mix of performers and songs, a solid representation of the biggest selling artists at the time. And, the record is just plain fun.
Posted by Martin Maenza at 1:00 AM