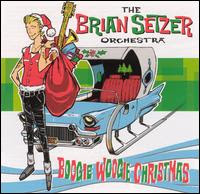 Brian Setzer got his musical start as part of the Stray Cats, a rockabilly band in the early 1980’s. Having grown up playing the baritone horn in his school band, he always had a love for the big band orchestra styles. When the Cats split, he created a new group in 1990 filled with trumpets, trombones, saxophones as well as a rhythm section and dubbed it the Brian Setzer Orchestra. Playing a mix of swing, jump blues, and jazz, they were part of the swing revival of the mid-1990’s.

In 2002, the Brian Setzer Orchestra put out their fifth album, the holiday tune filled Boogie Woogie Christmas. They applied their unique musical style to holiday standards and some original tracks, resulting in a swinging, fun Christmas record.


The record opens with rollicking rendition of “Jingle Bells”. This one totally gets my toes-tapping, and I like the tweak of the lyrics to traveling in a ‘57 Chevrolet.

The up-tempo party continues with their rendition of “Winter Wonderland”. Setzer drops in a nice guitar solo, something you don’t hear in every holiday song.

The music of Elvis Presley was very likely an inspiration to Setzer as he developed his own musical styles. So it is only fitting that he and the band take on “Blue Christmas”. The band holds back on the reins, going for a more rockabilly approach to it which works well.

“Santa Claus Is Back in Town” is another track Elvis originally performed. Setzer rings the blues out of this one nicely with his wailing guitar.

Next up is “Baby, It’s Cold Outside” with Setzer singing a duet with 1960’s sex kitten Ann Margret. I remember having a huge crush on her growing up, from her starring role in Bye Bye, Birdie to her animated take on an episode of the Flintstones, both from 1963. This version has a smooth, seductive musical score to it. And with an eighteen year age difference between Setzer and Margaret, it also has a bit May/December romance to it.

The band provides an interesting take on the familiar musical movements of “The Nutcracker Suite”. I had honestly never heard anything like this before until I heard this instrumental track. I like the big band approach to this classic ballet.

“(Everybody’s Waitin’ For) The Man with the Bag” was originally recorded in 1950 by pop and jazz singer Kay Starr.

“Sleigh Ride” is very horn heavy, which of course I enjoy. It gives it a 60’s jazz flavor.

“So They Say It’s Christmas” is an original holiday song composed by Setzer. It has a slow, smooth tempo in the classic style of Bing Crosby, Frank Sinatra or Mel Torme.

On “O Holy Night”, it sounds like Setzer is channeling the King as his vocals take on some of Elvis’ inflections. It certainly works for me.

The album closes out with “The Amens”, a one minute solemn a cappella number that closes with a single bell toll.

I actually discovered Boogie Woogie Christmas back in 2008 shortly after I started my membership at emusic.com. I was already a fan of the Brian Setzer Orchestra from their 1990’s albums and, of course, of the Stray Cats back in the 1980’s. The songs on this record have become some of my favorite holiday tunes as I really enjoy the swing/jazz/blues approach they bring to them. If you’re looking for something a little different for that holiday party, I would very much recommend this album.
Posted by Martin Maenza at 4:30 AM