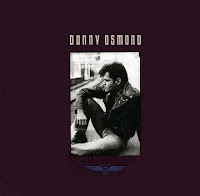 Performing is in the Osmond family blood. Donny started out as a teen idol in the early 1970’s, first as a part of a group with his four older brothers and then a solo career. In the mid-70’s, he teamed up with his sister Marie for a number of albums and a successful musical variety show. He took some time off from the music scene for most of the 80’s as he struggled with a squeaky-clean image of his youth.


In 1989, he returned to the studio and the charts with a self-titled album Donny Osmond. In the US, the album reached number 54 on the Billboard Hot 200 charts; in Canada the album went to number 61. It also generated a number of hit singles.

The album starts off with the hit song “Soldier of Love”, an energetic dance track. The song went to number 29 in the UK, number 20 on the US Billboard Adult Contemporary charts, and number 2 on the Billboard Top 40 charts (denied the number 1 spot by another hunky male heartthrob, soap star turned singer Michael Damian and his cover of “Rock On”). I recall that this song was very popular in the clubs during my final year of bachelorhood.

The single “If It’s Love That You Want” charted in the UK and went to number 70. This mid-tempo pop song has a bouncy beat too and scratchy guitars. It fits well with the previous track; both were written by the same song writing team of Carl Sturken and Evan Rogers.

The next track, a ballad, opens with a gospel organ and smooth saxophone. “Sacred Emotion” was the second big single from the record. It went to number 13 on the US Billboard Top 40 charts and number 4 on the Adult Contemporary charts. This was popular in the clubs too, as a slow dance standard. It has a perfect swaying rhythm to it, and Osmond’s vocals convey the passion of the lyrics.

“Inner Rhythm”, co-written by Matthew Wilder, has a soulful sound to it that is a definite different approach for Osmond. He makes it work really well.

Continuing the exploration of styles, “Faces in the Mirror” has a funky groove to it. Osmond’s delivery of the lyrics has a clipped growl to it. To me, the song almost has a bit of a Minneapolis sound to it. It is definitely a good dance track.

The dance beats continue with the pulsing percussion of “My Secret Touch”.

“I’ll Be Good to You”, a bittersweet ballad, was the final single from the album. It went to number 10 on the US Adult Contemporary charts.

“Groove”, with a Latin flavored rhythm, was released as a single in 1987 in the UK where it reached number 77.

Things slow down once more for “Only Heaven Knows”. It reminds me of the type of ballads George Michael was putting out in the late 80’s as a solo artist.

“Hold On”, as a single, went to number 73 on the Billboard Hot 100 charts. It has a very familiar chorus and a wonderful saxophone solo to it.

I have always liked Donny Osmond as a performer since his days as a teen idol in the 70’s. One of the girls in my class who lived across the street Jeanie was a huge fan, owning many Osmond albums and having his posters all over her walls. We’d hang out in her basement and lip sync to Donny and Marie records (I doing the Donny parts, of course).

I had a copy of 1989’s Donny Osmond album on cassette, picked up for the hit singles but enjoyed for the entire offering. This definitely wasn’t the Donny Osmond of my youth; the songs had a very contemporary sound to them, achieving the desired result of breaking the mold and reinventing the singer for a new audience. I recently picked up a copy of the CD for a very good bargain price.
Posted by Martin Maenza at 4:30 AM