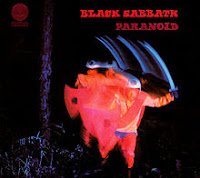 Before he was portrayed as a mumbling father on a MTV reality show, Osbourne was one of the founding members of the heavy metal rock band Black Sabbath in the late 1960’s. In 1970, they released their first studio album to much success. They followed it up later that year with Paranoid which went to number 1 on the UK album charts and number 12 on the US Billboard 200 charts. The album was ranked number 130 on Rolling Stone’s list of the 500 Greatest Albums of All Time.


Side one opens with the nearly eight-minute epic “War Pigs”, the third single from the album. The heavy guitars by Tony Iommi and Geezer Butler at the start set the dark, moody tone. Bill Ward’s drum solos on this one are amazing too. The lyrics paint the picture of a devastated world due to the acts of war between nations.

The title track “Paranoid” is next. This was the first single from the record; it only got to number 61 on the US Billboard Hot 100, but it did very well in Austria (number 3), Norway (number 6), Switzerland (number 2) and the UK (number 4). The drums and the guitars on this one move at a frantic pace, mirroring Ozzy’s vocal delivery.

Things slow down a mellow tempo with “Planet Caravan”. The song has a late 60’s psychedelic feel of floating through space with one’s lover. I like the vocal effects and the beat-poet-like drums. It is a nice break after two pedal-to-the-metal starting tracks.

The side closes with “Iron Man”, a song that is not about the Marvel comic book super-hero at all. Osbourne heard the initial guitar riff (a true classic that any music fan knows instantly) and thought of some man stomping around in a heavy, iron suit. It continues the post-apocalyptic themes from earlier tracks. Although the song only reached number 52 on the Billboard Hot 100 when released as the album’s second single, the song is a respected rock classic. It appears on Rolling Stone magazine’s list of the 500 Greatest Songs of All Time at number 317; VH-1 ranked it number 1 of the 40 Greatest Metal Songs. This is most definitely my favorite track on the album if not my favorite Black Sabbath song of all time.

Side two begins with “Electric Funeral”, a song about nuclear war and the aftermath. It was released on the B-Side of the “Iron Man” single. Like the first track on the album, it describes a post-apocalyptic world where everything is destroyed or mutated. Ozzy really has the perfect vocal delivery for these kinds of songs; his voice drips of gloom, doom and despair. I like how the tempo picks up a jazzy kind of swing to it midway through the song; that is totally unexpected.

“Hand of Doom” is another long track, clocking in at just over seven minutes. It builds from slower verses to an explosive chorus. It then moves through a number of musical movements, changing things up and keeping the listener focused. Like other songs on the record, this one too is a commentary on war; there are also references to the usage of drugs predominant in the youth culture at the time, often in response to the war.

“Rat Salad” is a cool two and a half minute instrumental piece that allows Iommi, Butler and Ward to jam in a fusion of metal, rock and blues.

The record closes with the interestingly titled “Fairies Wear Boots”, the fourth single from the album. Turns out the song was inspired by an encounter with some skinheads, a subculture of working class youths in the UK in the late 1960’s who were known for their shaved heads. Again, another amazing rock groove by the guys.

Over the past four decades, I have heard many of the songs from Paranoid countless times and various places. The album oriented rock station we listened to as teens played plenty of Black Sabbath. My older brother had this album too so the walls between our rooms vibrated with the heavy sounds of the band. And the songs continue to appear in places today (from video games like Guitar Hero and Rock Band to movie soundtracks like Iron Man). Many bands have covered these tracks over the years too.

The album is a true rock classic.
Posted by Martin Maenza at 4:30 AM