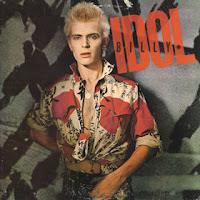 After his four song debut EP Don’t Stop (click here for that review) in 1981, rocker Billy Idol was ready to release his first full-length solo album. In July of 1982, the ten song album Billy Idol was released. The record reached number 45 on the US Billboard 200, becoming a gold seller. It also generated a pair of top selling singles.


Side one starts up with “Come On, Come On”. The song opens with a one-two punch from the Steves (Steve Stevens on guitar and Steve Missal on drums). The verses build in tempo to the relentless chorus.

“White Wedding (Part 1)” was the second single from the album. Supported by a gothic wedding themed video that played quite often on MTV, the song reached number 36 on the US Billboard Hot 100 and number 4 on the Mainstream Rock charts. This is one of those songs on Rock Band 2 that I love to sing, mostly because I know the words by heart after listening to it countless times over the last three decades. “White Wedding” was a huge dance favorite during my senior year of high school and early years of college; it was guaranteed to kick the party into high gear.

“Hot in the City”, the first single from the album, went to number 58 on the UK charts, number 23 on the US Billboard Hot 100 and number 31 on the Mainstream Rock charts. I like the female voices singing “strangers” before each verse as well as the punctuated notes at the ending part of the chorus. This was another great one to dance to back in my party days of my late teens - lots of high energy. The song was later used as the theme song to the Fox TV series Booker in 1989, a spin-off show from the highly successful 21 Jump Street.

“Dead on Arrival” is a smoking rocker with searing guitar riffs. They perfecty match Idol’s growling and howling vocals.

The next track, “Nobody’s Business”, slides the tempo down to a mid-range with a bit more a laid back feel too. Still, the song rocks, especially during the guitar solos.

Side two begins with “Love Calling”. The percussion on this one really resonates, making it a great tune to dance to. I like Idol’s slow and methodic vocals on the verses, the backing vocals that echo throughout and the wailing horns near the end. This one is definitely my favorite of the non-single tracks.

“Hole in the Wall” has another wonderful guitar opening.

“Shooting Stars” is next, followed by “It’s So Cruel”. I really like the hooks in the later one; they have a smooth swagger to them. Idol’s vocals again work in perfect concert with the guitars and drums.

“Congo Man”, a stripped-down African-tribal based version of the rhythms of “Love Calling”, closes out the record. 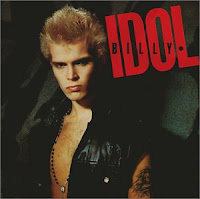 The 2002 CD release, which used the alternate album cover with Idol wearing a leather jacket, removed the last track from the original vinyl release and replaced with a new version of “Dancing with Myself”, a track originally on Don’t Stop (click here for that review) and later released as a single in 1983 as Idol’s popularity was on the rise.
Posted by Martin Maenza at 4:30 AM