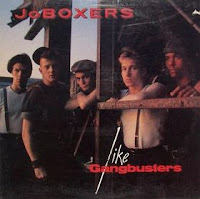 Happy forty-ninth birthday this week (November 23rd) to bassist/keyboardist/songwriter Chris Bostock. The English musician was a founding member of the rock and soul group called the JoBoxers.

The band released their debut album Like Gangbusters in 1983, and it made its way into the top 20 on the UK Album charts. It also generated a trio of singles.


Side one begins with “Boxerbeat”, the first single from the album. It went all the way to number 3 on the UK singles chart. Like a song out of the 60’s, the lyrics describe a dance-step that can be done to the up-tempo rhythm provided by Sean McLusky’s drums.

The pounding pace continues with “Crosstown Walk Up”. Singer Dig Wayne easily keeps up with the driving guitars of Bostock and Rob Marche and the frantic piano of Dave Collard.

“Fully Booked” has hints of a jazz swing to it as Wayne rattles off the many names of the women who make up his busy social calendar.

“Not My Night” has its own cool, rockabilly groove going. Like the Stray Cats, the JoBoxers picked up on that retro feel and gave it a new spin.

The second single and the song that the band is most known for is “Just Got Lucky”. In the UK it reached number 7; thanks to a popular video on MTV the song went to number 36 on the US Billboard Hot 100. I loved this song from the first time I heard it on the local college radio station. It is has such an infectious, positive energy to it that always makes me smile. This is a five-star song in my music library.

Side two starts with “She’s Got Sex”, is a bouncy track about a nymphomaniac. Collard has a sweet piano solo on this one.

“Curious George” is another funky track that is not about the literary monkey; the subject matter is a guy who sticks his nose into other people’s business. They do make reference to that famed primate though. Definitely a fun tune.

“Hide Nor Hair” is next. The piano and percussion give it more of a jazz feel that you‘d expect from the likes of Van Morrison.

“Crime of Passion” has a smooth soul sound.

The third and final single “Johnny Friendly” went to number 31 on the UK charts. The lyrics tell the tale a local gangster with a shady past.

I was a huge fan of the JoBoxers thanks to “Just Got Lucky” which I got into during my freshman year of college in 1983. The local college radio station played some of these tracks, and their music video for that hit was a favorite of mine. It took me a little over twenty six years though to track down the rest of the band’s discography for my music library. Patience was rewarded. These guys are solid musicians and made some great music.

The Essential Boxerbeat album with twenty tracks, including this entire album, is available on iTunes for $9.99 (that averages out to fifty cents a track).
Posted by Martin Maenza at 4:30 AM