The Beat / The English Beat - I Just Can't Stop It 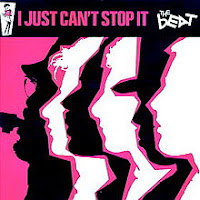 In the late 1970’s, a music genre known as “2 Tone” was created in the UK; it fused elements of punk rock, Ska, reggae, rock steady and new wave. And one of the bands that exemplified that sound was the Beat (known in the US as the English Beat). The band included Dave Wakeling (lead vocals and rhythm guitar), Ranking Roger (vocals), Andy Cox (lead guitar), David Steele (base guitar), Everett Morton (drums) and Saxa (saxophone).

The Beat’s 1980 debut album I Just Can’t Stop It reached number 3 in their native UK; in the US the album went to number 142 on the Billboard Album chart (with a fourteen week total run). The record was very popular among the alternative movements on college campuses, and it was also critically well received.


Side one opens with “Mirror in the Bathroom”, a single that reached number 4 on the UK charts. It opens with a rapid fire drumbeat and a smooth sax. The lyrics always gave me the impression of drugs (cocaine) and addiction; it could be symbolic in some ways too as in addicted to another person or to one‘s own vanity (thus the mirror and glass top tables to watch yourself eat).

“Hands Off…She’s Mine” was the first single from the album and went to number 9 in the UK and number 22 on the US Dance charts. This one’s a fairly straightforward warning from one guy to another: stay away from my girl. Turns out, though, she never was completely his alone to begin with.

“Two Swords” has a great message: “two swords slashing at each other only sharpen one another”. It is a great way to look at hatred, war and violence. And the rhythm is relentless.

I really like the mystique that the tempo of “Twist & Crawl” stirs up. The ratta-tat-tat of the lyrics too adds to that feeling.

“Rough Rider”, a cover of a Prince Buster tune, is a song sung the morning after a wild night of adult relations. I really like Ranking Roger’s accent as well as the use of the refrain from a children’s song in the middle of the song (“there’s a hole in the bucket, dear Liza, dear Liza”). So surreal.

“Click Click” is the shortest track on the album, coming in just shy of a minute and a half. The lyrics tell of a game of Russian roulette with only one bullet in the chambers.

Side two starts off with “Big Shot”, a commentary on the division of the economic classes.

“Whine & Grind / Stand Down Margaret” is next. The later half of the song is a message to at-the-time Prime Minister Margaret Thatcher regarding how she needs to handle the violence in the London streets.

“Noise in This World” follows. It has a frenzied feel to me, both in tempo and lyrics.

“Can’t Get Used to Losing You” was a song originally made popular in 1963 by Andy Williams; that version spent four weeks at the number 2 spot on the Billboard Hot 100 and four weeks at number 1 on the Easy Listening charts. The vocals and the guitars have an echo sound to them, as if coming from some place far away. It gives this version a nice feel, as if the song is playing across the decades.

“Best Friend”, the third and final single from the album went to number 22 in the UK. The lyrics tell of a self-centered person whose favorite topic of discussion is himself.

“Jackpot” ends the album on an up-beat tempo. I like its effective use of repetition of lines.

My first exposure to the Beat and the songs on I Just Can’t Stop It were from college radio. The local campus nearby played these songs as part of the UK music wave that had not yet hit mainstream radio. My older brother was in his first year of college at the time and came home with this album on vinyl, so I would hear the songs from the adjacent bedroom as well. Given the irresistible dance beats and the seductive wail of the saxophone, it is no wonder that I am a fan of this style of music and of the band itself.
Posted by Martin Maenza at 5:10 AM

Very good songs on this album - especially "Twist and Crawl."

One thing about the (English) Beat - and about Madness - is that they were both able to stretch well beyond the 2 tone genre.