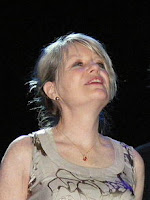 The California born Weymouth met up with future bandmates David Byrne and Chris Frantz at the Rhode Island School of Design. Frantz and Weymouth dated and eventually helped found the Talking Heads in 1975. Two years later, she and Frantz married.

To help cope with a long hiatus, the couple formed a side project called the Tom Tom Club in 1980. The bassist still is active in music.

For my review of the Talking Heads 1980 album Remain in Light, click here

For my review of the 1981 Tom Tom Club debut Tom Tom Club, click here
Posted by Martin Maenza at 4:30 AM