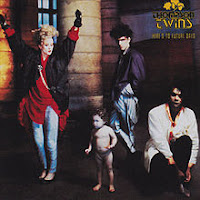 Building upon the success of the previous two albums Quick Step and Side Kick and Into the Gap (reviewed here and here respectively), the Thompson Twins continued their run with the 1985 release Here's to Future Days. Released on September 17th of 1980, the album reached number 5 on the UK charts and number 20 on the US Billboard Album chart (with a thirty-five week run total). It was also a Platinum seller in Canada. The incomparable Nile Rodgers co-produced this one with Tom Bailey.


Side one opens with "Don't Mess with Doctor Dream"; this second single reached number 15 on the UK charts. It opens with Leeway’s intriguing, scratchy percussion and then moves into a pumping dance beat. As with so many compositions by this band, I love all the layers to the music. The lyrics of this one always reminded me of a DC Comics character named Dr. Destiny who fought the Justice League of America; one of his modus operandi was invading the dreams of the heroes in an attempt to kill them.

The album's first single, "Lay Your Hands on Me", went to number 13 in the UK and number 6 on the US Billboard Hot 100. This one has a rock-gospel vibe to it, from the full choir on the chorus to the lyrics themselves. I’ve always liked the searing guitar solo in the middle of this one along with the xylophone played by Alannah Currie.

"Future Days" opens with a quirky, techno-like opening. It then settles into a funky guitar groove with choral chant chorus that is the album’s title is derived. The song is sort of a toast to a better tomorrow.

With some smooth saxophone and a slower tempo, "You Killed the Clown" is a nice bluesy number. The lyrics question a person who derives pleasure in ruining the happiness of others.

They end the first side with a cover of the Beatles' hit single "Revolution". The Thompson Twins version, the fourth and final single, only reached number 56 on the UK charts. They combine the original’s hard rocking riffs with their own multi-layered percussion to build a new call-to-arms for a new generation. I like this version a lot. Prior to the release of the album, the band debuted the song during their set at Live Aid in July of 1985 with Nile Rodgers, Madonna and guitarist Steve Stevens joining them for the jam.

Side two starts off with "King for a Day". This third single went to number 20 in the UK and number 8 in the US. The song has a bouncy rhythm that always puts me in a good mood when I hear it. The lyrical sentiment is a wonderful one - that a person would give up everything just to be with the one he loves.

"Love Is the Law", an anti-violence anthem, has a funky sway to its cadence. I like the use of Caribbean steel drums on this one; they have such a vibrant sound to them.

"Emperor's Clothes (Part 1)" has a bit of an Eastern flavor to its sound. The lyrics have a mystique to them as well with rich imagery and odd symbolism like “invisible men in the Emperor’s clothes” (drawing from the tale the Emperor’s New Clothes).

Another danceable track is "Tokyo" with its Asian musical hooks and pulsing beats. I get a kick out of the deep baritone voice repeating the song title through out.

The final track on the side and album is "Breakaway” on a solid note. This song easily goes from a slower tempo on the verses to a one-two punch chorus.

From my high school days I had been a fan of the Thompson Twins. That carried over through my college years, which is when I picked up Here's to Future Days on cassette between my sophomore and junior years of college. This album was a favorite of mine that spent a long time in heavy rotation on my tape decks. It was great to listen to it again today after so many years. I find it a somewhat underrated record as it didn't get as much play in the States; I find it equally satisfying as the earlier albums by the group.

In doing this review, I decided to check out eBay and found a copy of the two-disk 2008 CD release that I could purchase. I look forward to adding it to my digital collection very soon.
Posted by Martin Maenza at 4:57 AM