Stacy Lattisaw - Let Me Be Your Angel 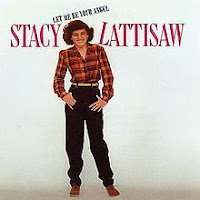 Recording her first album Young and in Love at age twelve, the following year in 1980 she released her second Let Me Be Your Angel This record went to number 44 on the US Billboard 200 album charts and number 9 on the Billboard R&B charts. It also generated a trio of singles.


Side one kicks off with “Jump to the Beat”, the second single. It went to number 3 in the UK and number 1 on the US Dance charts (making her the youngest artist to hit the top spot on the dance charts). The song has a solid disco sound thanks to the percussion of producer Narada Michael Walden and funky guitar riffs courtesy of Chic’s Nile Rodgers and Bernard Edwards.

The dance party continues with the next up-beat track. “Dynamite!”, the first single released, reached number 51 on the UK charts, number 8 on the US R&B charts, and number 1 on the US Dance charts. This track, like the first one, is polished and professional. The fact that Lattisaw was just barely a teen when she recorded these songs shows how much raw talent the label had to work with here.

“You Don’t Love Me Anymore” takes the tempo down a notch and pares down the instruments too. This allows Lattisaw’s vocals to further command the spotlight. She handles the lyrics with a level of maturity and confidence; she clearly did not have to experience lots of dating and heartbreak to be able to sing about it.

The side ends with a slower ballad “Dreaming”. This one definitely has more of a teen girl sound to it, with the sweeter musical structure and simpler lyrical sentiments.

Side two opens with the title track “Let Me Be Your Angel”, the third single. In the US it went to number 34 on the Adult Contemporary chart, number 21 on the Billboard Hot 100, number 8 on the R&B charts. This ballad really allows Lattisaw to demonstrate her vocal range, hitting some powerful notes on the chorus.

The tempo moves back into disco dance mode with the Latin beats and horn accents on “Don’t You Want to Feel It (For Yourself)”. This would be a great track for a dance mix if you’re looking for something that folks would not find overplayed.

“You Know I Like It” continues along the same vein. It has that perfect dance emphasis on the fourth beat.

“My Love” closes out the record with another ballad, this one with a beautiful piano accompaniment. The song is straight-forward and elegant.

Long time readers will know from my Seventies Saturday posts that I have been and always will be a huge fan of disco music. That’s the music where I began my love of dancing. The fact that I was slightly a year older than Lattisaw was at the time she released Let Me Be Your Angel just blows me away. Here I was navigating my freshmen year of high school with Earth Science and Algebra and she was out making amazing records. That’s so cool.
Posted by Martin Maenza at 4:30 AM