Back to the Future (soundtrack) 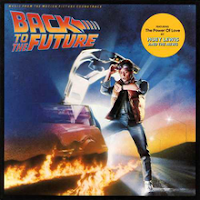 It was the summer of 1985 and I was working my college co-op job in Randolph, NJ. I spent a lot of my weekends at the local movie complex at the mall in Dover. One of the biggest films was the fantasy comedy-adventure Back to the Future starring Michael J. Fox, Christopher Lloyd, Lea Thompson, Crispin Glover and Thomas F. Wilson. Little did I know then that this was the opening volley of a trio of films that would become all-time favorites of mine.


The soundtrack album, which I had on cassette tape, was an interesting mix of music. It featured a number of contemporary rock songs to reflect the present time, a couple of orchestral compositions, and some more classic 50’s rock style songs.

Side one opens with “The Power of Love”, the hit single that gave Huey Lewis and the News their first number 1 record on the US Billboard Hot 100. The song was also nominated for an Academy Award. The trumpeting of the opening horns sets the tone for the track; you just knew it was going to be big. The guitar hook is very catchy and gets you grooving.

Next up is Lindsey Buckingham and “Time Bomb Town”. The song has a tropical swing with clipped-delivery of vocals that give it a different sound.

The Outatime Orchestra performs the first of Alan Silvestri’s compositions “Back to the Future”. Anyone who knows these films is familiar with this instrumental theme. It is big, bold and adventurous.

Eric Clapton offers up “Heaven Is One Step Away”, another tune with a bit of a tropical sound to it. It certainly makes a nice compliment to Buckingham’s track earlier.

Huey Lewis and the News close out the side with “Back in Time”, a song that appears briefly near the end of the film. The lyrics very much reflect the plot of the film. The song was later used as the opening theme for Back to the Future: The Animated Series. Of the songs on this record, this one has to be my favorite. It was not as overplayed as “The Power of Love” and, I think, has a stronger groove. Also, it has some wonderful saxophone to boot.

Side two starts with the “Back to the Future Overture”, a rather lengthy piece by the Outatime Orchestra. Clocking in at almost eight and a half minutes, this piece incorporates a few of the main musical themes from the score. Listening to it now I can almost start seeing scenes in my head: Doc trying to get everything rigged up at the clock tower, Marty trying to out run the terrorists, etc. It really captures the wonder and magic of the film.

Etta James’ “The Wallflower (Dance with Me Henry)” from 1955 is here to set the stage for the 50’s portion of the album. This early R&B classic is perfect reminder of those days just before rock ‘n roll exploded on the scene. It shows elements that the early rockers borrowed and made more mainstream. Classic stuff.

Next is Harry Waters Jr. recording under the guise of “Marvin Berry and the Starlighters” with a version of “Night Train”, a blues instrumental made popular in 1952 by Jimmy Forrest. The saxophone plays a big part here, setting up that unforgettable “strolling” sound. The piano rhythm is very prominent too, setting up that one-two punch.

He follows up with a version of “Earth Angel (Will You Be Mine)”, a doo-wop song first recorded by the Penguins in 1955. What I’ve always liked about the early 50’s rock was the usage of the piano and saxophone; I think it gives the music a sentimental sound to it.

The album closes out with a version of “Johnny B. Goode” as performed by “Marty McFly and the Starlighters”. In fact, this track is performed by Mark Campbell with a guitar solo by Tim May. The scene from the film where this comes is quite memorable, as time-tossed Marty McFly leaves his parent’s generation with a little preview of what is coming musically. Of course, he adds a little Hendrix and Van Halen for good measure. Funny stuff.

For me, the mix of music makes this soundtrack a little jarring. At the time this one was released there was also a full musical score album by Alan Silvestri and the orchestra. I can see why they wanted a few of those tracks here as well, for continuity. But if I were arranging the order I probably would have put one at the opening of the first side and one at the close of the second side. I probably also would have pulled the Buckingham and Clapton tracks; they are good songs but they just don’t seem to “fit” with everything else here.
Posted by Martin Maenza at 7:39 AM

Good piece, Martin--I own a lot of soundtracks, and this is one of my all-time favorite movies, so why don't I own this one?

Well, even though you didn't give a glowing review you still gave an interesting & good one--I think I'm going to get this after all :)