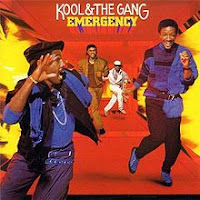 Formed in New Jersey in 1964, Kool & the Gang dabbled in many music styles over the decades: jazz, R&B, soul, funk and disco. The core of the group consisted of brothers Robert “Kool” and Ronald Bell (the later whose birthday was celebrated this week on November 1st), George “Funky” Brown, and Curtis “Fitz” Williams.

On November 15th of 1984, Kool & the Gang released Emergency, their eighteenth album and one of their best sellers. The Platinum selling record went to number 47 in the UK, number 45 in Australia, number 41 in New Zealand, number 26 in Germany, number 24 in Canada, number 13 in the Netherlands and on the US Billboard Album chart, and number 3 on the US Billboard R&B chart. It also produced four hit selling singles.

The next track continues the dance party with another infectious beat. “Fresh”, the second single, went to number 9 on the US Billboard Hot 100 and number 1 on the US Billboard R&B and Dance charts. It also hit number 27 in the Netherlands, number 26 in Germany, number 19 in Ireland, number 11 in the UK, number 10 in Canada, and number 5 on the US Billboard Adult Contemporary chart. This song helped popularize the slang meaning to the word, implying that "fresh" meant "exciting" or "appealing".

The strong musical set continues with the third track. “Misled”, the first single, reached number 10 on the US Billboard Hot 100 and number 3 on the US Billboard R&B charts. It also went to number 46 in Ireland, number 32 in Germany, number 28 in the UK, number 9 on the US Billboard Dance chart, and number 8 in Canada. The guitars on this one have a mysterious tone that mirrors the lyrics’ telling of a secretive, alluring woman. This is definitely my favorite track on the album.

Closing out the all-hits side is “Cherish”, the third single. This beautiful ballad was the highest charter of the tracks on the US Billboard Hot 100; it spent three weeks at the number 2 spot, denied by Dire Straits’ “Money For Nothing”. It also reached number 8 in Australia and on the US Billboard Dance chart, number 6 in Ireland, number 5 in Germany, number 4 in the UK, number 3 in the Netherlands, and number 1 in Canada and on the US Billboard R&B and Adult Contemporary charts. This song, which celebrates love, was a slow-dance favorite, not just in the clubs but also at many weddings over the few decades.

Side two starts with “Surrender” and its funky slide. The mix of Robert’s bass, George’s drums and Curtis’ synthesizer is the stuff of a smooth dance groove. The lyrics implore the listener to give in to the singer’s romantic overtures.

The band slows things down again with “Bad Woman”, a tale of a relationship gone wrong. Ronald’s saxophone solo adds a melancholy note to the story.

“You Are the One” closes out the album with an upbeat rhythm that bounces along at a great clip. At seven minutes running time it is the longest track on the record too. The lyrics are in praise of God and all of his blessings. It is definitely my favorite of the tracks on side two.

Kool & the Gang’s Emergency came out during my sophomore year of college. The hits were all the rage in the clubs through out all of 1985; we would hear at least one of them every night that we went out dancing. The smooth R&B grooves was one of a number of genres that I was into at that time, so these songs were always welcome. Listening to the whole album almost three decades later, I think it still holds up fairly well.
Posted by Martin Maenza at 6:07 AM

This was one of my all time favorite albums. The whole first side is classic. I still love "Emergency" and "Misled" and listen to them constantly.