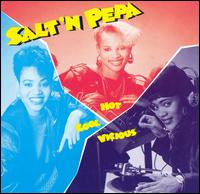 As 1986 was coming to a close, the cool winter months were heated up by the debut album from the all-girl rap group Salt-N-Pepa. The group was actually a trio consisting of Cheryl James (“Salt”), Sandra Denton (“Pepa”, whose birthday it just happens to be today November 9th) and Deidra “Dee Dee” Roper (Spinderella, the group’s deejay). Hot, Cool & Vicious sold very well, going Platinum in the US and Gold in Canada. Chart-wise, it reached number 26 on the US Billboard Hot 200, number 27 in Canada, and number 7 on the US Billboard R&B charts.

“Push It” was a huge club hit back in the day. I remember that every time those opening notes started, everyone quickly hurried to the dance floor to get down. The song has a great groove, solid hooks, and sexually suggestive lyrics. It made for safe foreplay. It remains a favorite of mine today, even after nearly a quarter of a century.

“Beauty and the Beat” is next with a hand-clap rhythm. The track showcases Spinderella’s cutting and mixing skills well.

The third single “Tramp” reached number 21 on the R&B charts. The lyrics tell of people who play around and get a bad reputation, all set to a very funky groove.

“I’ll Take Your Man” borrows samples from Parliament Funkadelic and Yes’ “Owner of a Lonely Heart”.

The tempo goes reggae with “It’s All Right”, a slower rhythm with an island flavor.

Side two opens with “Chick on the Side”, the fifth and final single. It reached number 55 on the R&B charts and number 49 on the Dance charts. I like that the gals went to a 1975 R&B jam for the basis of this song about a cheating boyfriend; I’ve always been a fan of the Pointer Sisters.

“I Desire” is next. It has a number of repeated samples and cuts that give the song a jarring yet effective rhythm. I like that they are vaguely familiar but not overexposed samples which many other rappers of the time used. Fresh and creative samples always impressed me.

“The Showstopper” was the first single released by the group in 1985, prior to the cutting of the record. It went to number 46 on the R&B charts. This earliest example of their work shows rawness with the girls calling themselves by their real names in spots rather than their stage names. It definitely has an old school rap sound to it. Comparing it to the rest of the tracks on the album, you can see how far the group had come in just a year or so.

The album closes with “My Mike Sounds Nice”, the second single from the album. It went to number 41 on the R&B charts.

Hot, Cool & Vicious is another one of those albums I picked up on cassette during my final year of college. I was definitely getting into a lot of club dance/hip-hop at the time. If it had a decent groove and a non-offensive message I was glad to pick it up.
Posted by Martin Maenza at 5:17 AM