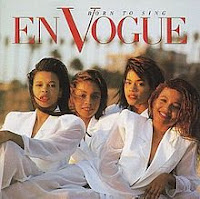 In the summer of 1989, Robinson along with Cindy Herron, Maxine Jones and Terry Ellis came together in Oakland, California, to form the modern day R&B girl-group En Vogue. Combining strong voices with beauty and intelligence, the ladies made a strong debut with their 1990 album Born to Sing which reached number 21 on the US Billboard 200 and number 3 on the Billboard R&B charts. Within six months, the album had sold over one million copies in the US alone.


The album opens with “Party”, a one-minute piece that is like listening in to conversations at a social gathering. It helps establish the image of the group.

The first actual song, “Strange”, is a funky groove that analyzes changes in a man’s behavior in the relationship over time. Clearly this guy is up to something on the side. The chorus showcases the harmonies of the group quite nicely.

“Lies”, the second single, went to number 38 on the Billboard Hot 100 and number 1 on the R&B/Hip-Hop Singles charts. It continues the theme from the previous track, warning about untruths told in life and relationships and how they are such destructive things. Each of the four gets a shot at a vocal solo in this song and it also features a rap by guest Debbie T, another Oakland performer. The song also includes a sample of B.T. Express’ “If It Don’t Turn You On (You Ought to Leave It Alone)”

“Boogie Woogie Bugle Boy” was originally recorded during World War II by the Andrew Sisters. En Vogue, in less than a minute, gives the song a new, hip-hop freshness. I would have loved to hear them do a full blown version.

The record‘s first single “Hold On” went to number 2 on the Billboard Hot 100 (denied number 1 by Sinead O’Connor’s version of “Nothing Compares 2 U”) and number 1 on the R&B/Hip-Hop Singles chart. In the UK, it reached number 5. It won the Billboard Music Award for R&B Song of the Year for 1990. I love the a cappella opening they do of the Motown classic “Who’s Lovin’ You”. It then drops into a fantastic funky groove which samples both James Brown’s “The Payback” and Melvin Bliss’ “Synthetic Substitution”. This one really gets to my core with those hard to resist dance hooks.

The tempo is slowed down with “Part of Me”, a song with heavy percussion and piano lines to it. The lyrics have a strong spiritual and optimistic message to it.

“You Don’t Have to Worry”, the third single, also reached number 1 on the R&B/Hip-Hop charts. This song about reassurance has a solid funky rhythm that mirrors that of the earlier “Hold On”. I like the scratchy samples used for the bridge in the later half of the song.

“Time Goes On” contains a very subtle sample from “Troglodyte (Cave Man)”, a 1970’s classic by the Jimmy Castor Bunch. The tick-tocks roll from one speaker to another, giving the dance track a nice hook.

“Just Can’t Stay Away” slows the tempo down once more with a smooth ballad.

The mid-tempo emotional plea “Don’t Go”, the fourth and final single, went to number 3 on the R&B/Hip-Hop charts.

Time for one more dance track with “Luv Lines”. I really like the syncopation on the chorus on this one. It is definitely my favorite of the non-single tracks.

The album closes with the moving ballad “Waitin’ on You”, complete with some sexy saxophone.

Born to Sing is a solid debut from En Vogue; it showcases the angelic voices of the quartet and is part of a new musical direction for R&B/dance music that came about as the 90’s were starting. I really love how their voices blend so well, like ingredients in a delicious, rich recipe; their music is pleasing feast for my ears.
Posted by Martin Maenza at 4:30 AM