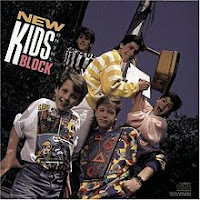 Boston producer Maurice Starr was attempting to recreate the magic of when he discovered the guys who would become New Edition a few years earlier. In 1984, Jonathan along with brother Jordan, Joey McIntyre, Donnie Wahlberg and Danny Wood were chosen out of hundreds of audition to be assembled as a new musical group. Together, the five would become known as New Kids on the Block.


By Spring of 1986, they had a record contract and a debut album New Kids on the Block out in the record stores on April 1st of that year. The record did fairly well, reaching number 25 on the US Billboard 200 chart, number 17 in Canada and number 6 in the UK. The record since has achieved multi-platinum sales status.

Side one starts with “Stop It Girl”, the second single from the album. It failed to make much noise on the charts though. The song has a strong dance beat and blended harmonies on the chorus. To me, it brings to mind the early days of the Jackson 5 or the Osmonds. It is a very polished pop song.

“Didn’t I (Blow Your Mind)” was a hit single back in 1970 by the Delfonics which has been covered by many artists over the years. The New Kids did well with their version, the third single from the album; it reached number 8 on the US Billboard Hot 100, number 34 on the R&B/Hip-Hop Singles chart and number 12 on the Adult Contemporary charts. This track sticks fairly close to the original classic in tempo and arrangement; the guys add their youthful sound to the vocals. I’m definitely a fan of this version.

“Popsicle” is a bouncy dance track that is reminiscent to Starr’s earliest work with New Edition (it has that same early 80’s synth/percussion combo). It spotlights Jordan’s amazing falsetto vocals and raps by all five guys.

The dance beats continue with “Angel”, another ode to teenaged dating. The song also features shout outs to all the guys in the group and a spelling association for the letters in the word “angel” - both classic pop song conventions.

“Be My Girl”, the first single from the album, is a mid-tempo ballad with Wahlberg on lead vocals. Although it got a lot of play in their hometown, the song too did not do well nationally. Its only chart appearance was at number 90 on the US Billboard R&B/Hip-Hop Singles chart.

Side two begins with Wahlberg on the lead on “New Kids on the Block”, a non-threatening rap groove and solid dance beats. Wahlberg delivers his rhymes with confidence and attitude that really sells the song.

“Are You Down?” has a driving dance groove to it as well, very much in line to many of the mid-80’s club tunes.

The tempo slows down with another ballad; “I Wanna Be Loved by You” features the sweet harmonies and another R&B classic convention (having the guys each take a chance to introduce themselves along with their zodiac signs) used in songs like the 1977 “Float On” by the Floaters.

“Don’t Give Up on Me” turns up the tempo once more with a catchy, danceable number.

McIntyre takes the lead vocals on the final track “Treat Me Right”. The song has a tempo that skips along in a way similar to the Jackson 5’s “Rocking Robin”.

I had a copy of New Kids on the Block on cassette, picked up in 1988 when the guys’ second album Hangin’ Tough was popular. I’ve always had a spot for bubble-gum pop music ever since I was a kid in the early 70’s. To me, this album falls right into that category while at the same time picking up on many mid 80‘s music styles too like funky dance grooves and the crossover rap sounds. Starr’s production team crafted ten perfect pop tracks and the boys clearly had the musical talent to bring them to life.
Posted by Martin Maenza at 4:30 AM