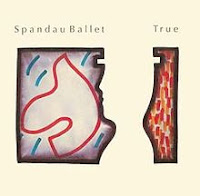 Next week we celebrate Thanksgiving here in the US, so I thought it would be nice to review one of those records I’ve always been “thankful” for. Here is one of those albums.

On March 4th of 1983, UK band Spandau Ballet followed up their second album Diamond (click here for that review) with a record that would become a huge seller for them and finally give them a breakthrough in the US market. True, with a strong mixture of jazz, soul and R&B, went to number 1 on the UK charts, going Platinum there, number 1 on the New Zealand charts and number 19 on the US Billboard Hot 200.


Side one begins with “Pleasure”, a mid-tempo number with a swinging opening. I love the Latin percussion by John Keeble and the sweeping keyboards by Martin Kemp. And Tony Hadley’s vocals just capture that sensual moment perfectly with the help of Steve Norman on saxophone. By the time this three and a half minutes end, I am already transported away from any stresses of the daily life.

“Communication”, the second single, went to number 12 in the UK and number 59 on the US Billboard Hot 100. The three point blend of drums, synths and guitars on this one create a highly danceable track. As a teenager, I would dance about my room to this one and lose myself in the multi-layers of the rhythms. It ties as my second favorite track on the record.

I like the opening bass by Martin Kemp on “Code of Love”, a song with a great story of espionage and mystery. I get lost completely in the flow of this one, carried along by those saxophone parts and the drumbeats.

“Gold”, the fourth single, went to number 2 in the UK; in the US it went to number 29 on the Hot 100 and number 17 on the Adult Contemporary charts. Gary’s piano opening is beautiful and builds, along with Tony’s vocals, into a powerful explosion just under the one minute mark. As I listen to it again right now at my desk my upper body and head instinctively begin to sway in time. It is another one I love to dance to and ties for my second favorite track.

Side two starts with “Lifeline”. As the first single from the record, it reached number 7 in the UK. This one has some wonderful guitar riffs that after decades of listening to are part of my very core being.

“Heaven Is a Secret” is an undulating love song that varies its tempo a number of times over with great ease.

“Foundation” has so many musical layers to it to that build to a high energy track.

As the third single, “True” was the best selling hit from the album. It took the number 1 top spot in the UK; in the US it went to number 4 on the Hot 100 and number 1 on the Adult Contemporary charts. This pop-ballad’s lyrics pay tribute to Motown legend Marvin Gaye and his musical style. I can remember slow dancing to this one during my early college days as a stared into a young woman’s eyes and hoping for a deep, sensual kiss. It is the first one that would come to mind if someone asked me to name my perfect love song. This one is a five-star song in my book, my favorite song from the album and probably one of my favorite songs from the entire 80’s decade.

True came out during the spring of my senior year of high school; I picked up the album a short time after that and it quickly became a mainstay in my collection. With that original vinyl copy and its linear notes, I memorized the lyrics to every one of the songs and to this day will sing along with Tony on each track.

This is an album that was there for me many times through out the rest of the 1980’s. True was not only a good time party record for me, but it was also something I turned to when I needed to be uplifted from a down-funk mood too. Maybe it was the soothing sax or the supportive beats or the pitch-perfect blend on the vocals. Whatever it was, this album worked like magic every single time.

I’ve listened to this album countless times over the past twenty eight years, and I know I’ll listen to it countless times more in the decades to come. Spandau Ballet will never go out of style for me.
Posted by Martin Maenza at 4:30 AM

excellent description of a fantastic album, truly one of the best out there and I agree with all you have said. I have loved these guys since the True album and concert, having all of their material True is the best, my favourite song for life. There is nothing quite like a true band who can actually play instruments!

Thank you so much for your comments. I appreciate them and agree with you on all points.