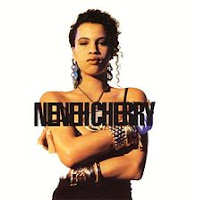 As the step daughter of American jazz trumpeter Don Cherry, Neneh Cherry always had a thing for music. Her earliest work was with a punk rock band in London. She also spent some time as a deejay, playing rap music on a reggae pirate radio station.

In 1989, at age twenty four, she released her debut album Raw Like Sushi which did well across the international charts (number 7 in Austria, 10 in Germany, 4 in the Netherlands, 3 in Sweden, 6 in Switzerland, 2 in the UK and 40 in the US). It also generated five singles.


Side opens with her first single “Buffalo Stance” which hit number 1 in the Netherlands, number 2 in Switzerland, and number 3 in both the UK and the US. Buffalo refers to a house of fashion formed by stylist Ray Petri, thus the full title refers to a type of pose models like Cherry and others did while on photo-shoots. The song also samples Malcolm McLaren’s 1982 song “Buffalo Gals”. I remember this one being very popular in the clubs in the last months of the 80’s; it has a steady beat, great hooks and plenty of attitude.

The second single “Manchild” broke the top 10 in a number of countries (2 in Germany, 3 in the Netherlands, 4 in New Zealand and Switzerland, 5 in the UK). This one has a slower and sensitive rhythm with some strong string sections. It allows Neneh the opportunity to both sing and rap.

“Kisses on the Wind”, the third single, did the best on the US charts (it reached number 8). It only reached number 20 in the UK and 23 in Germany. The song has an urban feel to its rhythm and the lyrics tell of a young woman who turns everyone’s head when she walks through the neighborhood.

“Inna City Mama”, the fifth and final single from the album, went to number 7 in the Netherlands and 31 in the UK. I’m a big fan of the smooth hip-hop percussion on this track; it was a very popular style in the late 80’s and early 90’s. The lyrics tell of a young mother trying to make ends meet in the inner city.

“The Next Generation” opens with a spoken word poem before exploding into a full-tribal beat fueled rap. The song is all about the hope of a better world that a parent has for their newborn child.

Side two begins in the “Love Ghetto”, an analogy of a place that lacks a loving relationship. The lyrics are more of an affirmation, though, about hitting a relationship homerun leaving this love ghetto behind.

“Heart” is a song about a woman stealing a man from another woman out of spite and hatred. As a single it only reached number 73 on the US Billboard Hot 100.

“Phoney Ladies”, a song about deceptive women, is next.

“Outré Risqué Locomotive” has a solid dance beat and contains some smooth sexual references. I like the bounce to this one.

“So Here I Come” closes out the album on a funky fresh tip.

Raw Like Sushi is another of those albums of the late 80’s that I picked up on cassette in my post-college years. I really liked the confident place that Neneh Cherry came from with her songs. She has a solid style that fused singing and rapping seamlessly. Listening to this one again after over twenty years, I still feel that the production on the record was very tight, creating some great tunes to groove to.
Posted by Martin Maenza at 5:11 AM