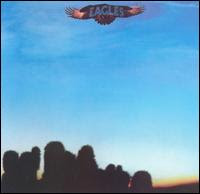 Glenn Frey, who is celebrating a birthday tomorrow November 6th, first teamed with Don Henley, Bernie Leadon and Randy Meisner as a backing band for Linda Ronstadt on her debut album in 1971. They performed with her once live before going off to form their own band the Eagles. By the summer of 1972, they were ready to release their self-titled debut record Eagles, an album that did very well. It reached number 22 on the US Billboard Pop Charts and number 13 on the Canadian charts, and it also generated three Top 40 hit singles. The record was also popular with the critics; Rolling Stone magazine has ranked it at number 374 on its list of the 500 Greatest Albums of All-Time.


Side one opens with "Take It Easy", the first single from the album and from the band. It reached number 12 on the US Billboard Top 40 chart and number 8 on the Canadian charts. Jackson Browne originally started writing the song; Frey then worked with him to further develop the track. The Eagles recorded it first; Browne later released it on his second album in 1973. This is easily my favorite song from the record, one that I inevitably sing along with every time it comes on the radio. My wife does too. This is definitely one of those songs we both have heard countless times and never tire of; we both try hard to harmonize when we’re singing along to it together.

The second single "Witchy Woman", which was penned by Henley and Leadon, went to number 9 on the US Billboard charts, number 8 in Canada, and number 26 in the Netherlands. I like the almost tribal beats at the opening and then how it segues into a haunting rhythm.

Frey wrote the next two songs. "Chug All Night" has a nice driving rhythm to it with strong guitar chords and a steady beat. It is definitely one of those good drinking songs for a Friday night, good to kick the party up a notch.

"Most of Us Are Sad" slows things down and features Meisner on lead vocals. Unlike the previous track, this one is introspective and melancholy. Quite a contrast. Still, it is a good tune if you’re in one of those chill moods.

"Nightingale", another track written by Jackson Browne, sings the praises of a good woman who can make the world a better place.

Side two starts with "Train Leaves Here This Morning". I like the one guitar for the first verse and the other guys joining in at the chorus. Add in the backing vocals that blow through like a gentle breeze and you get a mellow, relaxed song.

The steady thump-thump drumbeats and the heavy guitar strums of "Take the Devil" are ominous. It is perfect for a dark, autumn evening with a slight chill in the air.

The guys play around with sound on "Earlybird", creating an insistent tweeting. The combination of banjos and electric guitar play well off one another too, fusing the country and rock elements together.

"Peaceful Easy Feeling", the third and final single, went to number 22 in US charts and number 35 in Canada. The song showcases the band's three part vocal harmony with Frey on leads, and Leadon and Meisner on backing. The lyrics are so descriptive that they paint a crystal clear picture in my mind. It really speaks to those sometimes indescribable feelings that come with the love of that right person.

"Tryin'" closes out the record on an up-beat note. The song’s message is one of positive thinking with a rhythm which reflects that.

The Eagles were at the forefront of establishing a laid-back California country-rock sound that was very popular in the 1970's. Even though I was only seven years old when Eagles was released, I can remember hearing many of these songs on both AM and FM radio growing up.

What I find very interesting about the band is that the balance of contributions is fairly equitable across this record: each of the four contributed writing credits and the lead vocals are fairly split across the group. I think that gives the group a varied viewpoint as each musician brings something of their own to the musical banquet. The songs on this record are rock classics that never really go out of style; they are just as good today as they were nearly forty years ago.
Posted by Martin Maenza at 7:39 AM