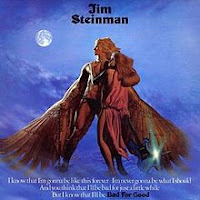 After the successful collaboration on Meat Loaf’s debut album Bat Out of Hell (click here for that review), Steinman was ready to work on a follow up album. Unfortunately, Meat Loaf suffered some problems with his voice that made recording not an option.


Steinman decided to record the songs he had been writing as a solo project, with a little musical help along the way from Roy Bittan and Max Weinberg from the E Street Band, Rory Dodd, Todd Rundgren and Karla DeVito . The result was the 1981 album Bad For Good. The record did well, reaching number 63 on the US Billboard Album charts and number 14 on the Swedish charts.

A lot of the critics at the time criticized the record mostly in the area of Steinman’s vocals. They felt his voice was too thin and not strong enough to carry the sweepingly dramatic lyrics of his compositions.

A number of the tracks on this album eventually had life on other albums by other singers. I’ll point those out along the way as we look at the two sides of this record.

Side one opens with the title track “Bad For Good”. In typical Steinman fashion, it opens with thundering drums followed by classic keyboards. It then proceeds for the remaining eight plus minutes in a grand, rock opera fashion. The lyrics tell of a bad boy who tries to justify himself to the young woman who loves him. Steinman worked with Meat Loaf on a version of the song for his 2006 album Bat Out of Hell: the Monster is Loose.

“Lost Boys and Golden Girls”, a more ethereal follow up, features Rory Dodd on the lead vocals. This is a beautiful track with many layers that compliment one another well. A version would appear on Meat Loaf’s 1993 album Bat Out of Hell II: Back Into Hell.

“Love and Death and an American Guitar” is a spoken word piece about a young man who comes under the thrall of a possessed guitar. Steinman’s reading, full of passion and emotion, really sells it. The track would appear later under the title of “Wasted Youth” on Bat Out of Hell II.

“Stark Raving Love” has a lot going on in its seven and a half minutes length. It has an opening and bridge that sounds exactly like what Steinman would later use in the song “Holding Out For a Hero” sung by Bonnie Tyler on the Footloose soundtrack, right down to the do-do-do-do vocal parts. Midway through he adds an up-tempo reprise of the earlier track “Lost Boys and Golden Girls”. There is also a searing guitar solo near the end. It is a definite hodge-podge of a track but it works.

Side two opens with “Out of the Frying Pan (And Into the Fire)”. The lyrics tell of a hot summer night in the city that gets even hotter when passions ignite. I really like this composition, the musical arrangements - the piano parts in particular - and the lyrical phrases. Steinman really has an incredible knack in these two areas. This song too would later show up on Bat Out of Hell II.

“Surf’s Up”, which also features Dodd on vocals, has a strong piano accompaniment. This song of aching love would be re-recorded in 1984 by Meat Loaf for his album Bad Attitude.

The nearly eight minute long “Dance in My Pants” is a duet with Karla DeVito. The lyrics tell the tale of a gal and a guy getting together, and how she convinces him that dancing will be a prelude to a night of passion. It has an irresistible up-tempo rhythm and a powerful horn section.

The emotion-filled ballad “Left in the Dark” closes out the record. In 1984, Steinman produced a recording of the song for Barbra Streisand for her 1984 Emotion album, tweaking the lyrics to be song for a female point of view. Meat Loaf also recorded a version of the song for his 1995 album Welcome to the Neighborhood.

The original vinyl release also included a two-song seven inch single. Side A was “the Storm” which features New York Philharmonic conductor Steven Margoshes on piano.

Side B was “Rock and Roll Dreams Come Through” with Dodd on lead vocals. The song was released as a single and reached number 32 on the US Billboard charts in 1981. It features a wonderful tenor sax solo by Lou Marini. This track too showed up later on Bat Out of Hell II.

While I was aware it existed, I didn’t discover Bad For Good completely until a couple years ago. I was trying to fill out my monthly downloads on emusic.com and this one came on to my radar. As a fan of Jim Steinman’s songs, I felt I had to get a few downloads. I am glad I did. It is certainly an important piece of his musical history as well as providing context to later songs he did with Meat Loaf and other artists.
Posted by Martin Maenza at 5:30 AM

So now I know you weren't on campus at the same time I was, for you would have heard this album played loudly out the windows of my dorm room into the Roch/Fish quad. I actually preferred this to Bat Out of Hell for the content of the songs, though Steinman could not carry them as well as Meat Loaf did.

Back when I was still strumming an acoustic guitar, I played several of the songs from this album, along with BooH and Dead Ringer, the second Meat Loaf album.

Chuck, I thought it might be you! Thanks for dropping in, old friend. Your comments are always appreciated.