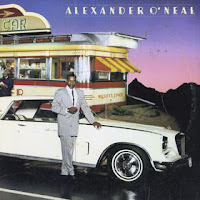 The American R&B artist was born November 15, 1953, in Mississippi and moved to Minnesota at age 20. Alexander O'Neal spent a number of years on the Minneapolis music scene including the early days of the funk band Flyte Time with Jimmy Jam, Terry Lewis and Monte Moir. They combined sharply dressed suits with smooth R&B grooves that helped define the signature "Minneapolis sound". When Prince helped the group get signed with Warner Brothers and had them change their name to the Time, O'Neal and Prince had a disagreement that lead to his leaving of the band. While Morris Day stepped in, O'Neal went solo.

In 1984, he was signed to Tabu records. In April of 1985, he put out his self-titled debut album Alexander O'Neal which reached number 92 on the US Billboard 200, number 72 in the Netherlands, number 21 on the US R&B chart and number 19 in the UK. The record produced four singles which did well on the R&B charts.


Side one opens with the third single; "A Broken Heart Can Mend" only reached number 62 on the R&B charts and number 96 on the UK charts. Starting the record with a slower groove might be considered risky but O’Neal easily pulls it off. His vocals are smooth and reassuring; the orchestration is rich and strong.

"If You Were Here Tonight", the second single, went to number 17 on the R&B charts and number 13 on the UK charts. This track is another heartfelt ballad, slow and seductive. If I were making a mix tape of romantic mood setting music back during my single days in the late 80’s, this track would be near the top of the list of songs to include.

O‘Neal keeps the mid-tempo going with "Do You Wanna Like I Do". What I really like about him is that he keeps the lyrics in a PG category. Unlike some other R&B artists, his image is that of a gentleman who knows how to treat a woman with class and respect. I like that about him.

"Look at Us Now" closes out a slow-jam, quiet storm side. This whole first side is perfect background mood music for a night of romance. I would venture to guess that many a guy used this first side to do just that.

Side two kicks the dance party off with a ten and a half minute medley made up of three movements: "Innocent", "Alex 9000" and "Innocent II". The first single from the album was "Innocent"; it stalled just short of entering the US Hot 100 (stopped at 101) but went all the way to number 11 on the R&B charts. This medley has a funky groove with sensual synthesizers, searing guitars and steady drumbeats.

The dance party continues with the next track. "What's Missing", the fourth and final single, reached number 8 on the R&B charts and number 40 on the dance charts.

The album closes with the mid-tempo "You Were Meant to Be My Lady (Not My Girl)", a song where O’Neal talks about how a youthful infatuation could turn into a more adult relationship years later.

I was in my junior year of college when I first discovered Alexander O'Neal; I would hear his tracks at the dance clubs I frequented on weekends in the mid-80‘s. As a fan of Prince, the Time and other groups out of the Minneapolis area, O'Neal was an instant favorite. I owned a copy of Alexander O'Neal on cassette and played it often, usually when I was getting ready for an evening out.
Posted by Martin Maenza at 4:51 AM