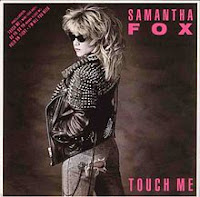 Samantha Karen Fox started her public career at age 16 as a topless Page Three model in the Sun, a British newspaper. Three years later in 1986, she recorded her first studio album Touch Me which went to number 17 in the UK and number 24 on the US Billboard 200 charts.

The US version of the release had a slightly different track listing for the second side of the album. Two of the tracks from the European release were replaced with different songs. For this review I will focus on the US track listing.


Side one opens with “Touch Me (I Want Your Body)”, the first single from the record. It went to number 3 in the UK and Ireland, and number 1 in Switzerland, Sweden, Norway and Canada. In the US it reached number 4 on the Billboard Top 40 charts. The song is about a young woman out on the town, searching for a man to satisfy all of her needs. I remember the song being very popular in the dance clubs, its teasing lyrics acting as a bit of public foreplay.

“I’m All You Need”, the fourth and final single, only reached number 41 in the UK and number 67 in Germany. This mid-tempo love song has a synthesizer pop sound that meshes well with Samantha’s pleasing vocals.

“Suzie, Don’t Leave Me with Your Boyfriend” has a one-two punch with a solid horn line and a bouncy beat. The lyrics are a straight-forward warning from one girl to another, advising that her man has a bit of a wandering eye.

“Hold On Tight”, the third single, went to number 26 in the UK and number 13 in the US. The song has a nice rockabilly swagger to it with a strong drumbeat and twanging guitar riffs. I really like the retro feel to it and the quick-step rhythm gets my feet tapping and head bobbing.

Side two starts with “Do Ya Do Ya (Wanna Please Me)”, the second single. The song went to number 10 in the UK, number 1 in Sweden, and number 87 on the US Billboard Hot 100. The song has a hard-rocking sound as Samantha once more taunts and teases. I like how the tempo starts out slower and then picks up double-time for the first verse.

“Want You to Want Me” was released as the B-side to “I’m All You Need”. It is another high energy, danceable track with a strong beat and keyboards that emphasize the chorus.

“Baby I’m Lost for Words” is next. It keeps the dance party going.

The hard-rocking edge returns for “Rockin’ in the City”, a celebration song for the end of the work week and time to cut loose. It is one that makes you want to turn up the volume to crank from your speakers.

The record closes out with “He’s Got Sex”, a gender changed version of the JoBoxer’s “She’s Got Sex” from their 1983 debut album Like Gangbusters. Samantha’s version also changes up the tempo a bit and makes it more danceable.

I owned a copy of this one on cassette back in the 80’s. What I like about Samantha Fox’s debut album Touch Me is that it features a variety of musical styles. Yes, most of the songs share a common theme of sexual desire and love, but Samantha changes things up to keep it interesting.
Posted by Martin Maenza at 5:28 AM