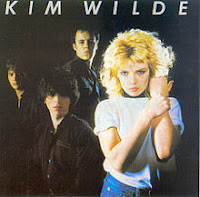 In the summer of 1981, she released her self-titled debut album Kim Wilde on the RAK record label in the UK. All of the songs were written by Kim's father Marty Wilde and her brother Ricky; she was backed by the UK symphonic rock band names the Enid. The record went Gold in the UK after reaching number 3 on those charts and Gold in Germany after reaching number 1. It also generated a trio of singles that did well in many countries across the globe.


Side one begins with "Water on Glass", a song about tinnitus (a medical condition that leads to ringing in the ears). This third single from the album went to number 11 in the UK and number 10 in Ireland. The song captures the new wave sound nicely with urgency to its tempo and the shredding guitars.

"Our Town" approached another serious subject: the deterioration of inner cities. The subject is punctuated by a pounding drumbeat and elaborate synthesizer solos.

"Everything We Know" changes things up with a reggae sound. The slower song has an aura of intrigue to it that I like.

The next song was released as a single but only in Peru. "Young Heroes" picks things back up with a bouncy number that celebrates youth. It has a lot in common with the next track so I find it interesting that they would put them back to back on the album.

"Kids in America" was the first single from the album and also the song that put Kim into the public eye. It went to number 2 in the UK and Sweden, and number 1 in Denmark, Ireland, and South Africa; in the US it reached number 25 on the Billboard Hot 100. This is one that always gets my feet tapping whenever I hear it, and I’ll sing along to it when it comes on in my car. As a testament to the song’s influence it has been covered by dozens of artists over the decades, including the Muffs’ version for the 1995 soundtrack for Clueless and the 2007 Jonas Brothers version with changed lyrics to "Kids of the Future".

Side two opens with "Chequered Love", the albums second single. This very danceable track reached number 6 in Australia, number 4 in the UK and Ireland, and number 2 in Belgium, Denmark and Germany.

"2-6-5-8-0" changes things up a bit again, this time by incorporating a backing horn section to give the song a slight Ska feel. I like the fade out of the chorus only to come back strong again near the end.

"You'll Never Be So Wrong" slows things down a bit, attempting a more emotional song. I feel it falls just slightly short of hitting the right spot though; to me it feels like Kim does not have enough life experience to really sell this one.

"Falling Out" dives back into the new wave for a song about a failed relationship.

The final song has an almost Twilight Zone feel to it. The lyrics of "Tuning in Tuning On" propose the theory that sound is alive. The synthesizers are the real star of this one.

Outside of “Kids in America”, it has been quite a long time since I heard most of the Kim Wilde album. Many of these songs were ones I had heard during my high school years, when I was listening to the local college radio station to find new and interesting music. Kim was part of the whole UK new wave invasion that was working its ways into the American alternative music scene in the early part of the 80’s. It was nice to revisit some of the nearly forgotten tracks again.
Posted by Martin Maenza at 4:30 AM

I was a big Kim Wilde fan, I loved Kids in America. I believe she is a successful horticulturalist now and has TV show in the UK.

Thanks Martin for this good article and tribute for Kim.We love this great artist in France too !!!
Have a special blog for her, soon JPaul