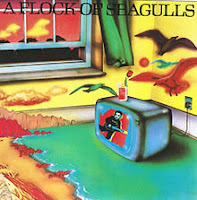 A quartet of musicians came from Liverpool, England. No, I’m not talking about the Beatles. I am talking about keyboardist/singer Mike Score (whose birthday is later this week on November 5th), drummer Ali Score, bassist Frank Maudsley (whose birthday is next week on November 10th) and guitarist Paul Reynolds. Together, with their wild hair and new wave groove, A Flock of Seagulls made a lasting impression on the MTV Generation.

Their self-titled debut album A Flock of Seagulls, released in April of 1982 sold well. It went to number 32 on the UK charts and number 10 on the US Billboard Hot 200. It also generated a number of international hit singles. Musically, the song is a concept album about alien abduction with the songs forming a sequential story line.


Side one takes off with “I Ran (So Far Away)”. This second single went to number 43 on the UK charts and number 9 on the US Billboard Hot 100, propelled by one of the early music videos on MTV. The song opens with a futuristic instrumental on guitars and synthesizers, setting the tone for the entire record. As a sci-fi fan, I always felt it was very cool. The lyrics tell the tale of a guy meeting a remarkable girl on the street who causes him to run away due to his shyness to approach her. There is something out of this world about her, something different and special.

“Space Age Love Song”, the third single, went to number 34 on the UK charts and number 30 on the US Billboard Hot 100. I love the cascading rhythm on this one, very infectious and catchy. It reminds me a lot of the arcade games that were popular at the time, another thing that I was into at the time this record came out.

“You Can Run” has urgency to the guitar riff that brings to mind someone being chased or hunted down.

“Don’t Ask Me” is next. It is very much a song about questioning existence and what lies beyond the stars in the heavens.

“Messages” closes out the side with more complex, layered guitar riffs.

Side two begins with “Telecommunication”, the album’s first single which was a dance club favorite. The song speaks of communication across the endless miles, into space and beyond. The vocals are more mechanical in their delivery as they provide the techno-speak.

“Modern Love is Automatic” was the fourth and final single. The synthesized wind effects and the guitar at the opening set a tone of futility and desolation. The lyrics tell of a love-affair between two very mismatched individuals - an automaton female and a living man from another world.

“Standing in the Doorway” is next. It has a slower, plodding pace to it at the start but then picks up drastically. The lyrics are pretty minimal, sticking to a voyeuristic viewpoint.

“D.N.A.” won the band a Grammy award in 1983 for Best Rock Instrumental Performance.

“Man Made” closes out the record on a slower, more introspective tempo. It comments on how man first made machines but now machines are more in control, that we’ve come to rely upon the very tools that made our lives easier. It is no surprise that this concept is still so strong nearly thirty years after A Flock of Seagulls made their first album.

Thanks to the exposure of a number of the tracks from the local college radio station, I picked up A Flock of Seagulls on vinyl at our local record store during my junior year of high school. I definitely was an early fan of the band even before we got MTV in our home. This is one of those records that were cool to listen to at night with the headphone on, my room illuminated only by the lights from the stereo. I think the record still holds up very well today.
Posted by Martin Maenza at 5:27 AM