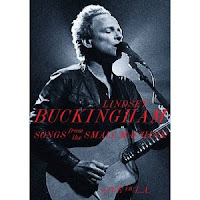 American singer/guitarist/composer Lindsey Buckingham has enjoyed a successful career for nearly four decades, both as a member of Fleetwood Mac and as a solo artist. In September of 2011, he released his sixth solo album Seeds We Sow on his own label. In April of 2011, he filmed a concert in support of that album at the Saban Theatre in Beverly Hills; this month that show has been released on DVD and Blu-ray.

Having the opportunity to review this two-disk package this week, I thought I would share my thoughts with you all.


The show starts out with a five song mini set with just Lindsey and his guitars; I say plural because he switches up which one he is using many times through out the show, getting just the right sound for the right song from each one. This acoustic set includes solo tracks like “Shut Us Down“ (2005), “Trouble” (1981) and “Go Insane” (1984), and Fleetwood Mac tunes “Never Going Back Again” and “Big Love”.

He is then joined on stage with the rest of his band: guitarist/keyboardist Brett Tuggle, guitarist Neale Heywood, and percussionist Walfredo Reyes Jr. The four then take us through the next thirteen tracks that include five tracks from the new album, a couple from earlier solo releases from the 90’s and 2000’s, and three more Fleetwood Mac tracks (“Tusk”, “Second Hand News” and “Go Your Own Way”) thrown in for good measure. The group has a great energy together, which culminates in the monster jam on “I’m So Afraid”. Lindsey has an amazing guitar solo on this one; it brings the house down.

The concert ends as it started, with Lindsey and a guitar with “Seeds We Sow”.

I really liked too how he takes the time between some of the songs to share with the audience. I like that whenever I’ve gone to see shows. It is about the artist trying to establish more of a repartee with the audience. It isn’t just the musicians on stage knocking out a play list.

Songs From the Small Machine not only includes the nineteen-song concert footage but it also comes with an audio CD of all but three of the songs from the recorded show. There is also a thirty minute interview on the DVD with Lindsey in the studio. He talks about his discovery of music as a child, his early years with Stevie Nicks, the formation of Fleetwood Mac and some of their key albums like Rumours and Tusk, the nature of the industry then versus now, his solo career, his musical process, and of course the new album.

For a rocker who is in his early 60's, I have to say that Lindsey Buckingham shows no signs of slowing down. He is still an incredible guitarist as this concert footage clearly shows. When you see someone performing live, you know there is no faking it. He deftly goes from one type of guitar to another, displaying at times such precise skill and control and at other times such raw, rocking power. I am in awe.

Similarly too, he also displays an amazing knack at song writing as well. The new material is wonderful, mature and complex. Hearing his new material makes me appreciate the fact that many of the old guard of musicians (those of the 60’s, 70’s and 80’s) still understand the value in the songwriting and composition. It is a true shame that today’s commercial radio does not get that value. These are the artists that are making music that matters, music that needs to be heard by a wider audience.

If you are a fan of Lindsey Buckingham, of classic guitar rock, or of just good music in general, this is a concert DVD to check out. Or better yet, go see him live when he tours to support the new record. You’ll enjoy it. I know I did.

See his website http://www.lindseybuckingham.com for tour dates.
Posted by Martin Maenza at 5:24 AM