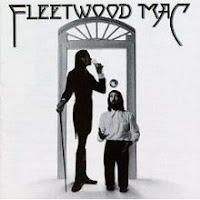 Welcome to another edition of Seventies Saturday, and also a happy sixty-sixth birthday to bassist John McVie.

By 1975, the British-American band Fleetwood Mac had already been making records for eight years. Their tenth studio album Fleetwood Mac was a breakthrough record for them in a number of ways. It was their first album to go multi-Platinum and their first number 1 on the US Billboard Hot 200 album charts (after being on the charts for nearly a year). It was also their first album to feature Lindsey Buckingham on guitar and Stevie Nicks on vocals; the couple brought a lot to the band including writing six of the eleven tracks here (with Christine McVie involved in writing four solo herself).


Rolling Stone magazine ranked it at number 183 on its list of the 500 Greatest Albums of All Time.

Side one opens with the Buckingham penned "Monday Morning". In some ways it reminds me a little of REO Speedwagon, which is very much a compliment. I like this one’s guitar riff - very catchy and gets into your head; Buckingham’s vocals on the verses matches it perfectly. It is a solid upbeat track to open the album and easily my favorite of the non-single tracks. This is one of those songs I’ve probably heard a couple dozen times and it still sounds refreshing to me every time, even after thirty six years.

"Warm Ways", written by keyboardist/vocalist Christine McVie, was the first single from the album released only in the UK. The song has a gentle flow to it, like a hot bath after a long stressful day. The vocals are very soothing.

"Blue Letter" kicks the tempo back up again. The harmonies between Buckingham and Nicks show how in tune the couple was at the time.

"Rhiannon" is a track Nicks wrote a few years prior; the song was inspired by a novel Triad by Mary Leader wherein the heroine is possessed by another woman named Rhiannon. As a single, the song reached number 11 on the US Billboard Hot 100 charts and number 46 in the UK. Nicks’ vocals are as enchanting as the repeating guitar chords; it completely sucks me in whenever I hear it.

Christine's "Over My Head" was the first single from the album to be released worldwide. It reached number 20 on the US Billboard Hot 100. The lyrics of the song seem to relate to a troubled marriage, very possibly hers with John.

Nicks' ballad "Crystal" is next. It is a very mellow track with a tad of a prog rock feel to it. It was a track that first appeared on the 1973 Buckingham Nicks album.

Side two starts with "Say You Love Me", another of Christine's tunes. As a single, it reached number 11 on the US Billboard Hot 100 and number 40 in the UK. I love the combination of the piano and the guitars on this one; they have a down-home sound to them. I often find myself singing along to harmonies on the chorus.

Nicks wrote "Landslide" at a time in her life when it felt like everything was crashing down on her. This song is so beautiful and sad, with Nicks’ smoky voice and the straight-forward guitar accompaniment. It is definitely my favorite of the ballads on the record.

Old and new collaborate on "World Turning", a track co-written by Christine and Buckingham. It has a signature Buckingham guitar progression to it which I very much enjoy.

"Sugar Daddy" is another of Christine's songs, this one with bouncy piano and organ parts. They band also gets an assist from Waddy Wachtel on rhythm guitar on this track.

As the album opened, it closes with another Buckingham tune called "I'm So Afraid". The song has a much heaver and darker mood to it, punctuated by Mick Fleetwood’s thundering drums.

I was just ten years old when Fleetwood Mac was released and still very much in my pop music-centric phase. My older brother was a teenager in high school though and more into the rock scene, thus I was exposed to this record via his listening habits. By the time I got into more rock music a few years later, this album was very much a huge hit and a main staple of the album-oriented rock station we picked up out of Buffalo. Between that and the songs I taped from my brother's vinyl I was set for my high school and college years.

As a grown adult, I can much more appreciate the subtext of the lyrics along with the musician-ship of the band members. It is indeed a classic album that has stood the test of time for thirty-six years and will continue to entertain generations of rockers for years to come.
Posted by Martin Maenza at 4:30 AM