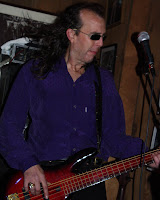 Today, November 10th, is the birthday of San Francisco Bay-area bassist Mario Cipollina. He started out his music career in the mid-70's playing with a variety of bands including Stoneground, Freelight, Rocky Sullivan, and Sound Hole. His most famous gig, though, were the years he was part of Huey Lewis and the News (1979 to 1994). In the past he's also worked with Bruce Hornsby, Bruce Springsteen, Foreigner, Stevie Ray Vaughn, Van Morrison, Nick Lowe, Bonnie Raitt and Dave Edmunds. He continues to record and tour with many acts today.

Sunday, November 13th, is the birthday of drummer Bill Gibson who has been with Huey Lewis and the News since the beginning. He's always felt that the highpoint of his career was when the band was asked to be part of the "We Are the World" project in 1985.


Here are the links to the reviews of a couple of albums Mario and Bill did as part of Huey Lewis and the News:

For the band's self-titled debut album Huey Lewis and the News, click here