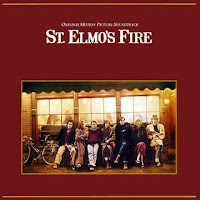 In 1985, Joel Schumacher directed a coming-of-age film about seven Georgetown University graduates adjusting to their post-college lives and the responsibilities of adulthood. The cast was made up of prominent young actors and actresses that were part of the 80’s Brat Pack genre: Emilio Estevez, Rob Lowe, Andrew McCarthy, Demi Moore, Judd Nelson, Ally Sheedy and Mare Winningham.


I was living in New Jersey when this film came out, working a six month co-op job between my sophomore and junior years of college. I remember seeing this film in the local Cineplex and instantly connecting to it. It was the right film at just the right time in my life. Since then I’ve seen it dozens of times over, own a copy on DVD, and often quote lines from it (especially the whispered “prison” line - my wife and I do that one all the time). The soundtrack album had a good mix of songs to it, even though most did not appear in the film itself.

Side one opens with “St. Elmo’s Fire (Man in Motion)” by John Parr. The song was written by David Foster with Canadian athlete Rick Hansen in mind. Hansen has been injured in a car accident as a teenager and was traveling the world via his wheelchair to raise awareness of spinal cord injuries. This song spent fourteen weeks in the US Billboard Top 40 including two weeks at the number 1 spot (it knocked out another soundtrack tune from the top spot - “The Power of Love” by Huey Lewis and the News, and it was eventually taken down by Dire Straits and “Money for Nothing”). I am a big fan of this track; I hear it and I’m instantly taken back to my college years when it came out.

Billy Squier is next with the hard-rocking “Shake Down”. This one is a decent song with a catchy rhythm.

Elefante is next with a piano-rock power ballad “Young and Innocent”. John Elefante was the lead singer and keyboardist for Kansas in the early 80’s.

Jon Anderson was the lead singer for the progressive rock band Yes for many years. “This Time It was Really Right” definitely has a strong 80’s Yes sound to it, heavy on the keyboards and production.

Fee Waybill is the lead singer for the Tubes. “Saved My Life” closes out a hard-rocking first side of the album quite well.

Side two starts out with the instrumental “Love Theme from St. Elmo’s Fire” by Canadian musician/composer/singer/songwriter/producer David Foster. This second single from the album spent ten weeks in the US Billboard Top 4, topping out at number 15. From the opening notes, I always see that jeep full of the cast driving down those Georgetown streets with the Autumn leaves falling. The synthesized keyboards on this one are lush.

Vikki Moss is a Canadian vocalist who has had a long-time association with David Foster. She provides the vocals on the soft-rock track “If I Turn You Away”, co-written by Foster and Richard Marx.

Airplay was a band formed by Foster with Jay Graydon in 1980. The duo reunited for the track “Stressed Out (Close to the Edge)”, a bouncy little new wave dance track.

Foster returns with “Georgetown”, another instrumental piece. Strands of this one can be heard in the earlier theme, especially those opening strings. This one also features deeper horns.

Foster closes out the album with “Love Theme From St. Elmo’s Fire (Just for a Moment)”. It takes the earlier theme, slows it down a tad and adds a vocal duet by Amy Holland and Donny Gerrard.
Posted by Martin Maenza at 4:30 AM