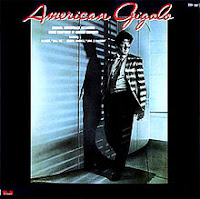 In 1980, Richard Gere and Lauren Hutton starred in a film about a self-centered, superficial male prostitute in Los Angeles. With a budget of around $4.8 million, American Gigolo returned a tidy domestic box-office of almost $23 million.

The soundtrack recording did fairly well too. The album went all the way to number 7 on the US Billboard 200 Album charts. The cuts also spent a number of weeks in the top positions on the disco/dance charts. That is no surprise since Italian dance maestro Giorgio Moroder had his hand in writing all the tracks on the album.


Side one opens with Blondie’s huge hit “Call Me (Theme from American Gigolo)”. The track went to number 1 on the US, UK and Canadian charts, and number 2 in Australia, Ireland and Norway. While the single was around three and a half minutes long, the album cut is over eight minutes. That allows those famous hooks plenty of time to work their magic and keep you grooving. I’ve always loved the song (I had it on a 45) and am a fan of this extended version of the song. It features a lot of interesting solos.

Next up is Cheryl Barnes, known for her role in the film adaptation of Hair, with “Love and Passion”. I like its repetitive, almost tribal beat courtesy of Keith Forsey. It has a bit of a rock flair too thanks to the piano played by Harold Faltermeyer. And it also has a nice saxophone solo which is always welcome in my book.

Moroder’s “Night Drive” closes out the side. The song is a strong synthesizer version of the “Call Me” theme that adds some heavy guitar and funky percussion for the second half.

Side two starts up with “Hello Mr. W.A.M. (Finale)” which is based on a clarinet concerto “K. 622 in A Major” by Wolfgang Amadeus Mozart. I like the juxtaposition of these classical themes with modern rocking instruments.

“The Apartment” goes another direction entirely with a moody, synthesized composition. It brings to mind a paranoid, substance-enhanced nightmare.

“Palm Springs Drive” returns us back to the dance club with another synthesized variation of the musical themes from “Call Me”, but this time a bit more glitzy and glamour-filled.

“Night Drive (Reprise)” takes the earlier theme and slows it down to a dirge-like pace, complete with heavy tolling bells.

“The Seduction (Love Theme)” is performed by James Last, a German composer and keyboardist. His piano playing is beautiful yet is undercut at the same time by a constant synth hook in the background. I would have rather that the later had been left off entirely.

The soundtrack for American Gigolo has many dance, disco elements to it. But the time it rolled out in 1980, the music scene was changing drastically. You can see Moroder attempting to adapt to some of that with the use of synthesizers and such; a number of the tracks experiment with sounds and rhythms. The heavy reliance on the familiar “Call Me” theme might turn a few listeners off, especially if you’re not as big of a fan of it. For me, I liked see the many experiments with different instruments, tempos and such.
Posted by Martin Maenza at 8:21 AM