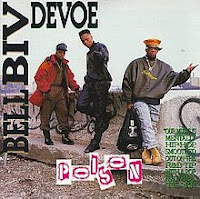 After New Edition broke up in the late 80’s, three of its members went on to form a group called Bell Biv DeVoe (taken from the last names of Ricky Bell, Michael Bivins and Ronnie DeVoe). Their debut record Poison was released in early 1990 was a multi-Platinum seller and went to number 5 on the US Billboard Hot 200 and number 1 on the US Billboard R&B charts. The record is one of those that pioneered the “New Jack Swing” sound of the early 90’s, by combining hip-hop, funk, soul and pop music together.


Side one opens with “Dope!”, a bouncy ode to all the wonderfulness of a certain woman. Listening to this one with headphones on, you really get the full effect of the cuts from speaker to speaker.

“B.B.D. (I Thought It Was Me)?”, the second single, went to number 26 on the Billboard Hot 100, number 16 on the Dance/Club chart and number 1 on the R&B/Hip-Hop chart. The lyrics tell the tale of a wild gal whose behavior has nothing to do with being with one specific guy.

The dance party continues with “Let Me Know Something?!” and its thumping beat. I like the mix of singing and rapping on this one.

The third single, “Do Me!”, went to number 3 on the Billboard Hot 100, number 6 on the Dance/Club chart and number 4 on the R&B/Hip-Hop chart. I remember this one was a huge dance floor favorite during our final months of clubbing before my wife and I got married. The song has a raw, primal sound to it which showed these young men of a former boy-band had long since grown up. “Smack it up, flip it, rub it down, oh no!”

“Ronnie, Bobby, Ricky, Mike, Ralph and Johnny (Word to the Mutha)!” reunites the guys with their New Edition brothers for a funky throw down.

Side two starts off with “Poison”, the first single from the record. It reached number 3 on the Billboard Hot 100, number 7 on the Dance/Club chart, and number 1 on the R&B/Hip-Hop Singles chart. This is definitely my favorite song on this album. I love the ratta-tat-tat of the rhythms and the smooth blend of the harmonies. This is a classic from that year. Heck, they even did a version of it during the first season of Glee with Will and the other teachers (second or third episode if I recall correctly).

Finally, it is time to slow things down with a cool R&B ballad. “When Will I See You Smile Again?” was the last single from the album to chart, stalling at number 63 on the Billboard Hot 100 but scoring a number 3 on the R&B/Hip-Hop chart.

The slower pace continues for the final track “I Do Need You”.

The cassette and CD releases of the album also included a tenth track, an extended club version of “Poison” that clocked in at nearly eight minutes in length.

I had a copy of this Bell Biv DeVoe debut on cassette, picked up mostly for the big hits “Do Me!” and “Poison”. I was an instant fan of the New Jack Swing sound; I’ve always been a slave to the rhythm. The production on this record is solid with many layers built upon for each track.
Posted by Martin Maenza at 4:30 AM