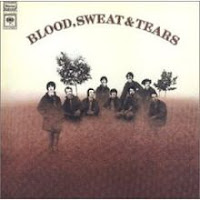 Welcome to an edition of Sixties Saturday, and a happy birthday also to saxophonist/pianist Fred Lipsius whose 68th birthday it is today (November 19th).

Lipsius was part of Blood, Sweat & Tears when the band released their second studio album in December of 1968. The self-titled Blood, Sweat & Tears was a commercial success, spending seven weeks (non-successive) at the top of the US Billboard 200 album chart and generating three top 5 hit singles. The album received the Grammy for Album of the Year in 1970. It also spent eight weeks total (non-successive) at the number 1 spot on the Canadian album charts. In the UK the album reached number 15 on the charts.


Between the first album and this one, the band had a change up in lead singers. David Clayton-Thomas came on board with the group for this one. Also, three more musicians joined the group as well: Lew Soloff and Chuck Winfield (both on trumpet and flugelhorn), and Jerry Hyman (trombone, recorder).

Side one opens with "Variations on a Theme By Erik Satie" (1st and 2nd Movement), which was an adaptation of "Trois Gymnopédies", arranged by Dick Halligan. Satie was a French composer from the early part of the 20th Century. Halligan has a wonderful flute solo on this one, with solid horns by the rest of the band.

"Smiling Phases", which was co-written by Steve Winwood, has a funky groove to it along with a rocking piano and organ solos.

"Sometimes in Winter" slows things down with an introspective number. The horns fittingly set that melancholy mood to mirror the lyrics. The tempo adjusts too add to phases of the narrative.

"More and More" is next. Clayton-Thomas’ booming voice works in perfect concert with the powerful horns.

"And When I Die" was originally recorded by Peter, Paul and Mary in 1966. As this album's third single, the cover became the best known version of the song and reached number 2 on the US Billboard charts (the Beatles with “Come Together“ kept them from reaching number 1). It opens with Steve Katz on the harmonica, followed by a building percussion pace by Bobby Colomby. The song has an old-time gospel feel to me which I like.

"God Bless the Child" was originally recorded in 1941 by jazz great Billie Holiday. She wrote it about an argument she had with her mother over money. Blood, Sweat & Tears are just one of a long line of artists from 1949 to 2011 that have covered the song. This version has a slow, blues spin to it with the unleashed horns counterbalancing the more restrained vocals. There is so much musically going on in this version, and it all works well together.

Side two opens with a track by the new lead singer "Spinning Wheel". The song made it to number 2 on the US Billboard charts (kept out of the top by Zager and Evans with “In the Year 2525”) and number 1 on the Adult Contemporary charts. Lipsius was the arranger on the song which won the Grammy for Best Instrumental Arrangement in 1970. The lyrics reflect the time when psychedelic imagery was all over in songs and this one suggests not getting caught up in all that since everything eventually comes around in full-circle.

"You've Made Me So Very Happy", the albums first single, went to number 2 on the US Billboard charts (denied the top spot by the Fifth Dimension and “Aquarius/Let the Sunshine In“). It was originally recorded by Motown artist Brenda Holloway in 1967 and went to number 39 on the Billboard charts. I really like the Blood, Sweat & Tears version as it mixes rock and jazz elements well.

"Blues - Part II" is the longest piece on the record, clocking in at close to twelve minutes. It includes adaptations of "Sunshine of Your Love" by Cream and "Spoonful" by blues great Willie Dixon. I really like the spotlight on Halligan on the organ on this one for the first two minutes before the song moves into a blues rhythm. Lipsius is back with a sweet saxophone solo here.

The record closes as it began with "Variations on a Theme By Erik Satie" (1st Movement), a two minute reprise of the opening track.

Although I was hardly four years old when this album became popular in 1969, I was aware of the hit songs by Blood, Sweat & Tears at a very young age. Back then, the hit songs were all over AM radio, on TV variety shows, etc. But if you’ve only heard the hits you are missing out on some amazing musical compositions with some of the deeper, instrumental tracks. This one appears on the 1001 Albums You Should Hear Before You Die, and I definitely agree that this one is a must-hear.
Posted by Martin Maenza at 4:30 AM