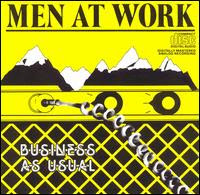 Today (April 22nd) marks the 30th anniversary of the US release of Business As Usual, the 1982 debut album from the Australian band Men At Work. The album debuted in their native Australia on November 9th of 1981.

Sadly, this week Greg Ham (who played flute, keyboards and saxophone on the album) was found dead in his Melbourne home on April 19th, 2012.

For my review of this album, please click here.

In celebration, I'm setting my iPod to give this 80's classic a play today. But I think I'll pass on the vegemite sandwich (I hear it is an acquired taste).
Posted by Martin Maenza at 7:12 AM