Katrina and the Waves - Walking on Sunshine 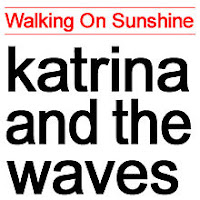 After moving around most of her childhood thanks to a father in the Air Force, Katrina’s family settled in Norfolk, England. It was there she and then-boyfriend Vince de la Cruz formed their first band “Mama’s Cooking”. A few years later, they changed their name to the Waves and started to play more original music. Guitarist Kimberley Rew joined the group; he previously was a member of Robyn Hitchcock’s Soft Boys until 1981. Eventually the band changed its name to Katrina and the Waves as Ms. Leskanich was the lead vocalist.

It is fitting that the first album by the group I talk about on my blog is their debut record. Walking On Sunshine was released in January of 1983 but only on vinyl and in Canada. Rew wrote all the songs for this record.


Side one starts with “Dancing Street”, a celebratory tune about partying and having a good time. The song has a classic 60’s rock sound to it, complete with the organ stylings of Nick Glennie-Smith and the saxophone of Kevin Flanagan.

“Spiderman”, without the often forgotten hyphen, is very much an ode to the classic everyman super-hero from Marvel Comics. Drummer Alex Cooper keeps a steady beat, while Rew’s lead guitar and de la Cruz’s bass give it a proper, moody sound.

Most people probably know of the Bangles version of “Going Down to Liverpool” from their 1984 debut album, but it was Katrina and the Waves who recorded it first. Rew sang the lead vocals on this original version; Katrina sang the lead on the re-recorded version on their 1985 album. The lyrics are about being unemployed in England and spending the day doing nothing while collecting unemployment benefits (as noted by the mention of a UB40 document).

“Machine Gun Smith” is high energy number with punchy, punctuated vocals and a rocking, rapid-fire accompaniment. The guys and Katrina really go to town on the guitars on this one.

This original “Walking on Sunshine” has more of a surf rock vibe to go with ethereal organ sounds in the background. For me, this song is very infectious and hard to not smile when I hear it. It is just pure infectious power-pop. I can’t help but think of Barry (Jack Black’s character) in High Fidelity dancing around the record store to this one, much to Rob Gordon’s dismay (played by John Cusack).

Side two begins with “Brown Eyed Son”, another strong rocking number with a mix of the 60’s and a post-punk flavor combined.

“Que te Quiero” changes things up a bit with a more south-west rock sound to it. Katrina clearly was drawing from her roots as a young teen here. It is a refreshing change up and shows the versatility of this group of musicians.

Rew takes the lead vocals again on “Don’t Take Her Out of My World”. It has a bit of a glam sound to it that brings to mind early David Bowie.

No surprise that “I Really Taught Me to Watusi” has a bouncy, danceable rhythm to it. Katrina’s rhythm guitar is very funky and Cooper’s percussion gets a wonderful spotlight too.

“Ain’t No Money (Buy You Love)” has a driven, soul groove to it. The song reminds me of the many English bands of the 60’s like the Beatles and Stones who were borrowing from the American rhythm and blues riffs. The Waves do this genre proud.

“Wipe Out” is the band’s super-tight cover to the 60’s surf rock classic first performed in 1963 by the California band the Surfaris.

Katrina delivers in-your-face vocals with plenty of attitude on “I Want a Man”.

Rew sings lead on “She Loves to Groove”, a seven inch version of the song that was later re-recorded for their next release.

“Help Me” has a strong blues riff to it and solid vocal harmonies from Katrina and Rew.

What is nice about this debut record is that you are hearing Katrina and the Waves as they were, before the studios polished them up for their later releases. Walking On Sunshine is the portrait of a hard-working, rock-loving group that certainly knew how to deliver the musical goods. If you only are familiar with their widely distributed 1985 album, you owe it to yourself to drop onto Spotify and check this release out.
Posted by Martin Maenza at 4:30 AM

Oh, I remember that song! Great post, thanks for sharing. : )