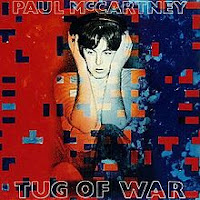 Today (April 26th) marks the 30th anniversary of the release of Paul McCartney’s fourth solo studio album, the first solo album since the end of the band Wings in April of the previous year.

Tug of War was a chart topping album in a number of countries. It went to number 1 in the UK, Norway, the Netherlands, Sweden, and Japan and in the US. It was nominated for the Grammy Award for Album of the Year and earned McCartney an American Music Award nomination for Favorite Pop/Rock Male Artist.


The title track opens side one. “Tug of War”, the third single, only got as high as number 53 in both the US and the UK. The song, which opens with the sounds of an actual tug of war competition, tells of a conflict between two sides that are at odds yet neither wants to give in. It ends on a more optimistic stance with hopes for a resolution in the future.

“Take It Away”, the second single from the album, was a strong selling hit. It reached number 18 in Australia, number 17 in Canada, number 15 in the UK and number 10 in the US. The song has a bit of a Calypso feel to its opening rhythm before slipping into a typical McCartney rock groove. Ringo Starr joined his old band mate to play drums on the track. I’ve always liked the up-tempo sound of this one; I remember it well from my Top-40 radio listening days in 1982.

“Somebody Who Cares” opens with a wonderful acoustic guitar solo. The message of the lyrics is one of positive encouragement to those that are down and out. Adrian Brett plays the pan pipes on this one.

“What’s That You’re Doing” features the first of two duets with Stevie Wonder on the album. It was nominated for a Grammy Award in the category of Best R&B Vocal Performance - Duo or Group. I love the funky 70’s bass line on this one; it is easily my favorite track on the first side. You don’t need that signature sound to know that Wonder co-wrote this track. I would be very shocked if this one wasn’t a favorite in urban dance clubs at the time; this over-six-minute jam would be perfect for grooving to.

“Here Today”, though not released as a single, did reach number 46 on the US Billboard Mainstream Rock charts. This gentle, bittersweet ballad reflects on McCartney’s friendship and love for his long-time collaborator John Lennon who was murdered two years prior. The track was produced by George Martin, the Beatles’ long-time producer; Martin also played electric piano on it. I like that it has that classic sound from the Sgt. Pepper’s era.

Side two begins with “Ballroom Dancing”, an upbeat rhythm to it that has faint hint of a “Roll Over Beethoven” in the background to it. The song actually mixes a number of musical genres in it very well.

“The Pound Is Sinking” is a commentary on the economic struggles across the globe.

“Wanderlust” is up next. While a beautifully arranged and sung track, it and the previous track feel a little bit like filler to me.

McCartney gets an assist with American rockabilly legend Carl Perkins on “Get It”. This is a pleasant little country-tinged ditty that really shows McCartney’s range across genres.

“Be What You See (Link)” is a thirty-four second interlude, with McCartney filtering his voice through electronic means.

“Dress Me Up as a Robber” has a snappy-swing to its rhythm with McCartney singing in a higher register. I like the Spanish guitar here.

Wonder returns to duet with McCartney on the final track with special guest Isaac Hayes on backing vocals. “Ebony and Ivory”, the first single from the album, was a top selling hit across the globe. It went to number 1 in the UK, Canada, Germany and the US (where it topped the Billboard Top 40 for seven weeks and the Adult Contemporary charts); it also went to number 2 in both Australia and the Netherlands. This classic song is ripe with symbolism with the title colors. First, there are the two types of keys on a piano which both musicians were skilled at playing. Second, there is the human aspect - be it on a racial level (black and white) or a personality level (bad and good). I can remember quite well how this song was all over the radio during the later part of my Junior year of high school. The song was nominated in the Grammy categories for Song of the Year, Record of the Year, and Best Pop Vocal Performance - Duo or Group. It was also nominated for the American Music Award as Favorite Pop/Rock Single.

Listening to Tug of War online (thanks to YouTube videos), I found it to be a cornucopia of musical styles. But where a hodge-podge might fail for other artists, McCartney makes it all work quite well. It helps that he had a number of decades in the business behind him by this point in 1982 and knew how to get the right people involved creating a deep, musical experience.
Posted by Martin Maenza at 4:25 AM