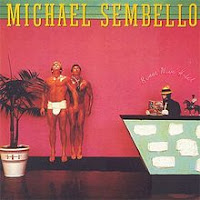 By age 17, Sembello was already an accomplished musician on guitar and keyboards. In the 1970’s he worked as a studio musician with the likes of Stevie Wonder, the Temptations, Michael Jackson, Diana Ross, Barbra Streisand, Donna Summer and more.

On September 25th, 1983, Sembello released his debut album Bossa Nova Hotel. The record peaked at number 80 on the US Billboard Hot 200 and included his only hits as a singer in the Top 40 to date.


Side one opens with “Automatic Man”, one of a number of tracks here co-written with his brother Danny Sembello. As the second single from the album, the song on rose as high as number 34 on the US Billboard Hot 100. The lyrics tell of a man programmed by technology to be the perfect guy. The music features a heavy synthesizer sound which further adds to that sci-fi feel.

“First Time” shifts to a soft-rock mid-tempo groove that brings to mind the solo work of Michael McDonald.

“Cowboy”, inspired by the mysterious heroes from the old Wild West films, has catchy piano accompaniment. It shows off Sembello’s versatility on the keyboard as it mixes various styles seamlessly. It does get a little odd near the end with the sound effects of a bar fight breaking out.

“It’s Over” features a moody little swing to a tale of the perfect relationship coming to a tragic end.

The side closes with “Maniac”, a track that was also featured on the hit soundtrack for the film Flashdance (click here for my review of that album). This synth-pop single, first inspired by the 1980 horror film of the same name but later retooled about a girl passionate for dancing, spent two weeks at the number 1 spot on the US Billboard Hot 100. It starts out with that driving beat that doesn't let go and builds with the synth layers. You can't help but want to move when you hear it - I know I can't resist it. Listening it takes me right back to dancing around my bedroom as a teen when the song came on the radio.

Side two starts off with “Godzilla”, which captures the total feel of a giant monster on a rampage. The musical composition is big and bold, demanding your full focus and attention. I like the horns and the various percussion in use here.

“Talk”, the third single from the album, did not manage to make an impact on the charts at all. This song about a failure to communicate has a slow, meandering tempo.

“Cadillac” is the 80’s answer to a song about a gold-digging woman who dates men to get expensive things.

Things slow down a bit more again for “Lay Back”, a seductive groove about giving in to passion and letting your desires guide your actions.

“Superman” opens with an exotic, Far East sound. The lyrics mix comic book references with religious symbolism in an intriguing, unexpected way. Clearly Sembello is referring to Christ but instead uses the name of a certain DC Comics hero instead.

For many, Michael Sembello is only going to be known by his one big hit song. But for those who want to hear more by the artist than just “Maniac”, I would suggest you give this one a listen. For me, there are a number of interesting tracks that show his adeptness as a composer and are worthy of follow-up listens.
Posted by Martin Maenza at 4:30 AM