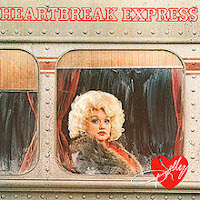 Coming off a big motion picture and the accompanying album (click here for my review of 9 to 5 and Odd Jobs), Dolly Parton was ready to tackle her twenty-fourth solo studio album.

On April 15th, 1982, exactly thirty years ago today, she released Heartbreak Express and returned to her more traditional country music roots. The album went to number 106 on the US Billboard Hot 200 and number 5 on the US Country Album charts. It generated two Top 10 country hit singles as well.


Side one opens with the title track. “Heartbreak Express” was the second single from the album; it went to number 7 on the US Country charts and number 1 on the Canadian Country charts. The lyrics tell of a woman who ends a doomed relationship, departing on a train. I like the old-fashioned sound to the musical composition thanks to the saxophone solo and the doo-wop backing vocals.

The first single “Single Women” went to number 8 on the US Country charts and also number 1 on the Canadian Country charts. The song first appeared on a Saturday Night Live sketch in October of 1981. Dolly’s version of the song was later used as the theme song for a 1984 TV movie by the same name that starred Tony Danza and Jean Smart. The bittersweet piano rag reflects the loneliness and desperation of a honky-tonk bar scene.

“My Blue Ridge Mountain Boy” opens with a single banjo, soon joined by a guitar and upright bass. Here Dolly reflects upon a teenaged romance she left behind when she moved on to Nashville to follow her career. She eventually comes to the realization that none of the men she met in the big city could hold a candle to the memory of that lost love. Sadly, he has moved on as well.

“As Much As Always” carries on a similar theme as the last song. Here we get a traditional country song about fond remembrances of a former love. I like how the steel guitar “cries” in the background, adding to the melancholy mood.

“Do I Ever Cross Your Mind” has a bouncy beat to it which reminds me a bit of another song of hers (“Two Doors Down” from 1977). I like how the deep tenor male voice in the background supports Dolly’s rich vocals on most of the song, making the sentiment mutual from both standpoints.

Side two starts off with “Release Me”, a cover of a 1953 country classic written by Eddie Miller, Robert Yount and James Pebworth. Englebert Humperdinck had one of the most known recorded versions of the song from 1967. Dolly’s version puts an up-tempo spin on the classic that makes it rather refreshing. Her band really has a good time jamming on this one.

“Barbara on Your Mind” was the B-side to the first single. The song is about a cheating husband who talks in his sleep, mentioning the name of another woman. His wife, so desperate for attention, accepts these nocturnal affections even though they are meant for another.

“Act Like a Fool” served as the B-side to the second single. The song mixes country with a little bit of gospel, taking this confessional revelation to church. I like how it goes from a slow swing on the opening verses to a bigger, bolder sound on the later ones, and then back again.

“Prime of Our Love” tells of a woman who has stood by her man, supportive and giving, only for him to leave her. There seem to be a lot of cheating men in Dolly’s little world here. But the album does have the word “heartbreak” right there in the title so we’re not bound to find many happy endings here.

“Hollywood Potters” is an interesting song for Dolly to do at this point in her career. Here she was coming off of a number of film projects like 9 To 5 and Best Little Whorehouse in Texas, and yet with the lyrics of this song she denounces the darker side of tinsel town.

I became a fan of Dolly Parton in the early 80’s, when her music was crossing the charts into the mainstream and her bubbling personality was appearing on the big screen. Despite that, this high school junior at the time was not apt to seek out any country albums on his own. It just was not part of the musical landscape of the teenagers in my western New York state hometown.

As someone with a few more decades on his belt, I can appreciate Heartbreak Express a lot more now. Having gone through my own share of relationship ups and downs in my early 20’s, I can better relate to songs like these from an experiential standpoint. Of course, Dolly is a national treasure and her voice is as lovely as ever here.
Posted by Martin Maenza at 4:30 AM