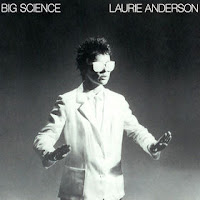 Laurie Anderson has been a performance artist since her college days in the late 1960’s and early 1970’s. While she has a master’s degree in sculpture, she is also an accomplished musician and composer; she plays the violin, keyboards and percussion as well as sings. She is also a pioneer in electronic music, having invented a number of devices that she has used in her recordings and live performances.

Anderson’s first studio album was 1982’s Big Science which happens to be celebrating its 30th anniversary this month. The album went to number 29 on the UK charts and number 124 on the US Billboard Hot 200 chart. The music here, very minimalist in sound and featuring mostly spoken word, is a subset of her eight-hour performance production United States Live.


The first track of side one is “From the Air”. The backing music is a repeated drum loop and a haunting saxophone riff which together set a tense mood. Anderson delivers the unemotional in-cabin “announcements” from the captain as a plane is about to crash. It was used as the B-side for the third single.

The title track was released as the second single from the record. “Big Science” opens with a lone wolf cry and a spiritual chanting. The lyrics remark upon urban sprawl and construction that causes the wide open expanses to be consumed and vanish.

“Sweaters” features Rufus Harley on bagpipes; their sound is matched by Anderson’s own vocal whines. The song is about someone becoming disillusioned with a former love to the point of disliking even the smallest details about that person.

“Walking & Falling”, another shorter track, is the concepts of life, death and gravity all rolled into one. The backing sound is that of the faint tapping on old pipes.

On “Born, Never Asked”, Anderson displays her violin playing. The backing composition also includes handclaps and the sounds of bottles being struck by sticks.

Side two starts with the track that earned her a seven album record contract with Warner Brothers records. “O Superman (For Massenet)” was first released independently in 1981 and then re-released with this album. The eight-minute epic track, which reached number 2 on the UK charts, is based upon an aria by Jules Massenet that was written in 1995. Anderson’s vocals were spoken through a vocoder to give them a different sound. The lyrics discuss issues of technology and communication as well as makes illusions to the Iran hostage crisis from 1979 to 1980. What I find interesting about the song is that I get so caught up in its serene, siren song that the time flies by

“Example #22” served as the B-side for the second single. The jaunty music here includes a number of saxophones, clarinets and a bassoon as well as an accordion. The lyrics are delivered in a mix of English and German.

“Let X=X” was released as the third single from the album, but only to the UK. Anderson employs the vocoder again here for parts of this sleepy tune. The previous song rolls directly into “It Tango” on the original vinyl release for one continuous track; they both share common musical elements.

My first exposure to Laurie Anderson was through the local college radio station when I was still in high school. Her avant-garde style was certainly not something that appealed to any of the mainstream, commercial stations. Hers was music that made you sit up, take notice and think about it afterwards.

While I did not pick up Big Science myself, my best friend from high school did. We would occasionally listen this one on vinyl when we were hanging out at his house. Of all the tracks, I think we both liked “O Superman” the best. John would often quote the lyrics at odd times through out our senior year of high school, mostly because this was an inside thing between he and I that very few of our friends would get. Laurie Anderson was definitely not someone whose recordings would appeal to everyone.
Posted by Martin Maenza at 4:33 AM