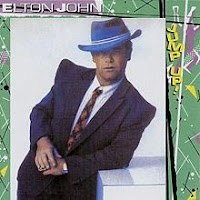 1982’s Jump Up! did its best down under with a number 3 charting in Australia and number 1 in New Zealand. In Elton’s native UK, the record reached number 13 and on this side of the pond it went to number 19 in Canada and number 17 on the US Billboard Hot 200.


Side one opens with “Dear John”, a tune about a guy coming home to find out his girlfriend has moved on and left a note to say good riddance. The reason it is upbeat though is that he was planning on leaving her too; she just saved him the trouble.

“Ball and Chain”, the third single, is about a love relationship that has gone bad. The woman is checked out and the man feels like he’s tied town like a prisoner. Pete Townshend was a guest guitarist on the track and gives it a good rocking sound that I like a bit. I’m surprised this one did not do well on the charts as it is very catchy.

“Legal Boys” was co-written by Elton and Tim Rice, noted British lyricist and composer of a number of musicals. As such, the song has a big, dramatic feel to it.

Elton goes a bit more new-wave and sci-fi with “I Am Your Robot”; the track includes synthesizers and a synth drum. The track seems a bit repetitive and cold to me.

“Blue Eyes” was the first single; it went to number 8 in the UK, number 5 in Canada, number 4 in Australia, and number 13 in the US Billboard Top 40. This ballad is what Elton does well; a beautiful melody and heartfelt vocals.

Side two begins with “Empty Garden (Hey Hey Johnny)”, written in memory of the late John Lennon who had been murdered in December of 1980. The two musicians had been good friends and performed together in Madison Square Garden in 1974. This moving ode was the second single from the album; it peaked at number 51 in the UK, number 8 in Canada and number 13 in the US. I often find myself singing along with this one, especially on the chorus.

The fourth single from the album was “Princess”. The song is a fairly straight-forward mid-tempo number about a woman who inspires him.

“Where Have All the Good Times Gone” has an opening that reminds me a little bit of “Don’t Go Breaking My Heart”, the 70’s duet between Elton and Kiki Dee. The lyrics reflect upon the days of the past and old relationships.

The album closes with “All Quiet on the Western Front”, a song about World War I and inspired by the 1929 novel of the same name by Enrich Maria Remarque. This fifth single failed to make a major impact on the charts. While a pleasant composition, I find it to be a bit sleepy and dull.

Growing up in the 70’s, I was a fan of Elton John’s music. I remember one birthday getting two of his greatest hits volumes on vinyl from my thirteenth birthday in 1980. In 1982 when Jump Up! was released, I was certainly into the singles from this album that were on the radio.

Listening to this whole record today, I have mixed responses. Four songs I absolutely love, three are okay and three do very little for me. So, this is probably one of those records where I can cherry-pick a few tracks for my collection and leave the rest to the category of been-there-heard-that.
Posted by Martin Maenza at 4:30 AM